"The Italian Genio": with Prosecco DOC we revolutionize the branded content world

Consorzio per la Tutela Prosecco DOC invests in the production of a fashion film to celebrate "The Italian Genius", and we at Tuorlo Magazine support it by creating a work of crypto art.

Consorzio per la Tutela Prosecco DOC debuts in a widely unexplored with the "The Italian Genio" project, trusting us with the creation of an original and non-reproducible film protected by an NFT (non fungible token) certificate, based on the Blockchain technology (registries that are shared between millions of server and are non modifiable, which ensure traceability).

NFTs are certificates that make a digital work of art a one of a kind, an actual work of art, through a unique digital signature that establishes the work's ownership. An NFT brings with itself precise and distinct information, such as owner and seller, in order to be easily verifiable and ensure the piece's originality.

The name comes from the difference of the other tokens based on blockchain technology, such as cryptocurrencies. While cryptocurrencies are fungible because by their nature are interchangeable between them, each NFT represents a specific asset. This is the reason of their uniqueness and their high value.

The piece's authenticity, thus ensured, will then allow "The Italian Genio" to be sold like a physical artistic product, as it will happen in the charity auction hosted by auction house Christie's the next 12th of October, at the Principe di Savoia Hotel in Milan, during the event La Vendemmia organized by MonteNapoleone District.

The proceeds will be donated to Dynamo Camp, a non-profit organization in Tuscany that works with recreational therapy for sick children and teens, hosting them for holiday and entertainment times, during their therapy or after hospitalizations.

The initiative will be part of a broader project that entails the realization of a "fashion film" (a short movie dedicated to trending topics) available from the 12th of October on Tuorlo Magazine and Prosecco DOC platforms, and on their social channels as well, and on Open Sea, a platform that hosts and sells collectible digital works of art.

"With this initiative - says Stefano Zanette, President of Prosecco DOC - Consorzio per la Tutela Prosecco DOC underlines its sensibility towards art in every expression, even when it presents an innovation perspective towards technology. Our label is, in fact, dynamic and open to every knowledge and creativity frontier, in every aspect: from culture to sport, to sustainability of productions and solidarity initiatives. This interpretation, united with rightfully observing traditions, is at the fundamentals of every choice that our Consorzio makes.”

“Prosecco DOC is an Italian excellence which is appreciated all over the world. It's born from master producers that every year invest their dedication and competency to realize a product that is an actual "made in Italy" flagship product. We wanted to honor this product by bringing it in a lifestyle setting and designing something that can last forever" - observes Luca Genova, Tuorlo Magazine's publisher and The House Of group CEO - "Our mission is to convey an authentic and sensorial tale of the food&beverage world, we, as Italians, wanted to interpret Prosecco DOC's world through art and we're proud to be pioneers in the NFT world, rewriting by doing so the rules of branded content.”

The work is the result of the collaboration between Tuorlo Magazine and Wayne Maser, internationally acclaimed photographer and director. Editing was curated by Nicolò Angeleri.

The work is accessible on the platform Open Sea.
Here, instead, the poster for the auction. 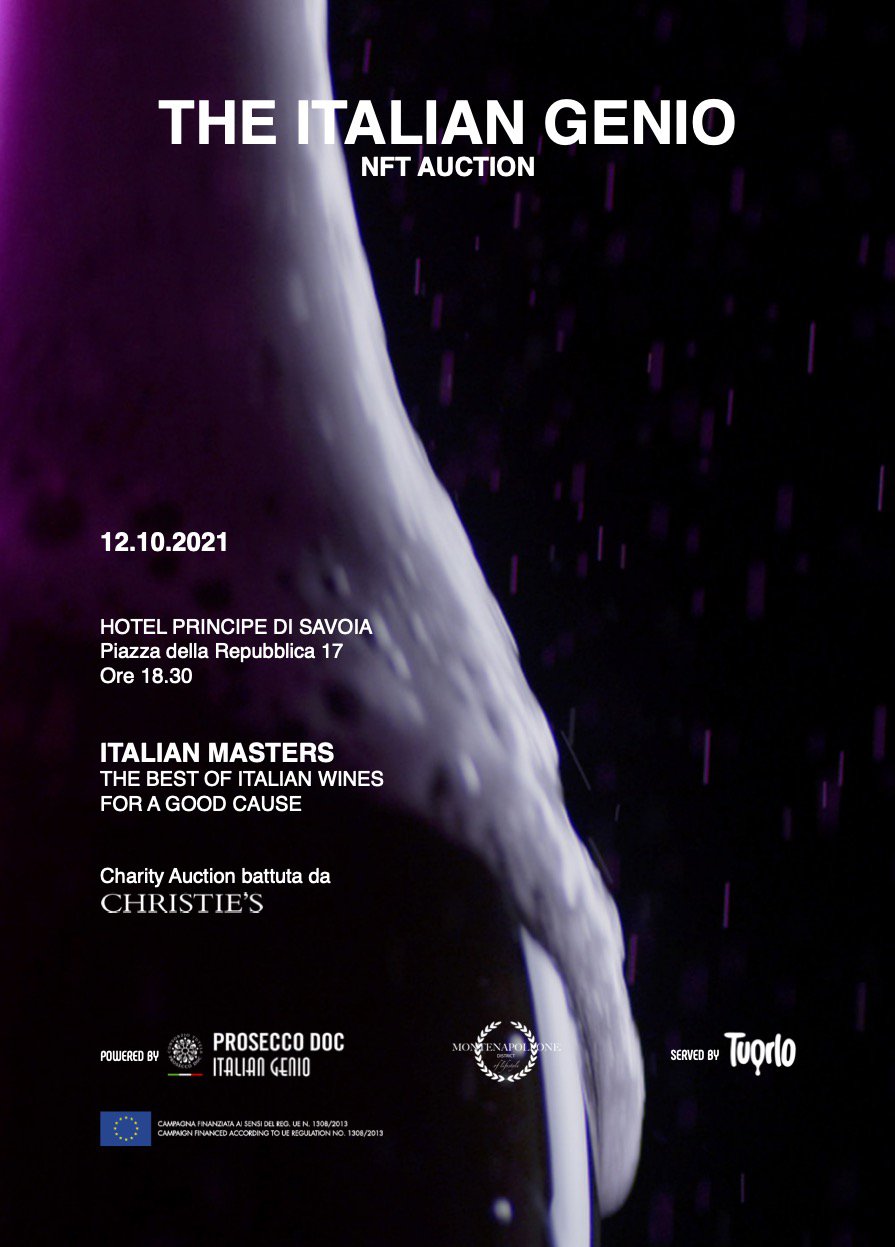