Humble or heavenly? Rethinking our relationship with the potato.

We visited Peru to witness the sacred potato harvest

May is a special time in Peru – this is the season of the harvest of potatoes, or papas nativas, along with other tubers (such as mashwa, oca and ullucu) with a range of mesmerising colours and curious shapes.

Chef Virgilio Martinez prizes these crops in his restaurants Central, located in Lima, and Mil, in Cuzco. He even devised a one-day harvest-themed event at Kjolle restaurant, run by his wife chef Pía León (who was recently named World’s Best Female Chef by the 50 Best list).

A visit to Central promises to take the diner on a culinary tour of the whole country, showcasing its biodiversity and climate. The team’s ethos is that they ‘cook ecosystems’. Each ingredient on the plate comes from Peru, and communicates a sense of the place where it originally came from. For example, in the dish called Cedro en mashuas, the tubers are plated alongside the fritillary flower, which is characteristically grown at high altitudes. In another dish, fittingly named The Heights, high-altitude tubers ocas and mashwas are served along with amaranth.

The celebration of papas nativas came into being as part of an emerging trend in the 70s and 80s focused on honouring Novo Andino or New Andean cuisine. Pioneered by a passionate group of personalities like journalist Bernardo Roccarei and chef Cucho La Rosa, this trend sought to revive interest in indigenous Andean ingredients such as potatoes and other tubers. Some of these innovative figures began exploring indigenous ingredients from the Andes and the Amazon, which had been cut off from the capital for years, and adapting them to modern cuisine. Many of these ingredients were fairly unknown in the cuisine of Lima, where fine dining restaurants were serving mostly French, Italian or Asian cuisine. Despite being part of the third generation of modern Peruvian chefs, Virgilio Martinez is the one whose contribution has arguably gained the most significant recognition on a global scale.

Martinez’s research sees him actively bringing the gastronomic traditions of the more authentic rural regions of Peru, including their attitudes towards indigenous ingredients, to the plates of upper-class Limeños.

Outside Lima, indigenous Andean farmers continue to embrace the Incan empire’s centuries-old traditions and farming culture. They still praise Mother Earth, or Pachamama, for all that she provides. In the rural cities around the Andes, their adoration for potatoes stems from their unparalleled connection with the land. The Incas’ spiritual connection with their crops was the basis for many beliefs and myths. Axomama or Acsumama in the Quechuan language – which, as an exclusively oral language, has different ways of spelling such words – is the goddess of potatoes and daughter of Pachamama or Mother Earth.

The Incas believed that when they died they should be buried alongside potatoes. Another belief attributed the best-quality crops to conopas, the protective goddess of the crops. These beliefs still constitute a very real part of the Andean people’s worldview. Each community worships their own Axomama. They have their own stories and myths around potatoes, such as one that refers to the dark spots on potatoes as their ‘eyes’, which you should remove lest you be hunted by them. Other stories consider the distorted shapes of potatoes to be a test for women who want to marry.

In Martinez’s hands, a fine dining restaurant becomes part of a bigger ecosystem. His famous expression “beyond the plate” refers to this unique connection being an essential part of everything his restaurants do. This is where the true value lies – it goes straight from the community to the table, often within a rural, political, cultural or even spiritual context.

“Our narratives encompass anthropology, sociology and art. Being sustainable is not enough; being on trend does not matter to us. Being unique, honest and authentic – that is our formula. And we have an obligation to showcase this in the privileged position we are in.” This is the position that Martinez arrived at after multiple trips around Peru, and particularly to Cuzco.

“I felt that passion when I saw the way in which people are connected to their soil – the way they preserve their traditions and their whole mindsets surrounding agriculture.”

“Those are the people we need to listen to. Not someone from abroad telling me which technology I should use. It is the disconnection from the land that makes people dependent on these trends. No, I prefer the knowledge of an indigenous person who has preserved the knowledge passed down through hundreds of years from their ancestors.”

Peruvian anthropologist Francesco Dangelo has been working on researching and connecting local communities from Cuzco. D’Angelo lived with the indigenous people for almost two years. “It was never about just ‘discovering’ – it was also about learning and connecting.” As he also mentions, “the idea was to give back to local people, to create value together”.

We were invited to the fields to witness the harvesting process, led by Ysabel Quispe Limafrom the Peasant Community of Ancoto, in the province of Moray, Cuzco. As we followed her in, from behind we noted her tight braids and confident posture. Soon we reached the rest of the community, arriving at the rambling field beneath the sharpest blue sky you’ve ever seen. Harvest is a spiritual time: people from the local community of Ancoto gather around the harvested potatoes for the Ayni, a moment of sharing and reciprocity when neighbours and family friends come together to help each other during the harvest. Anybody who asks for help then returns the favour by giving chicha de jora (a local fermented corn drink reminiscent of beer), some food and coca leaves to those who helped them. 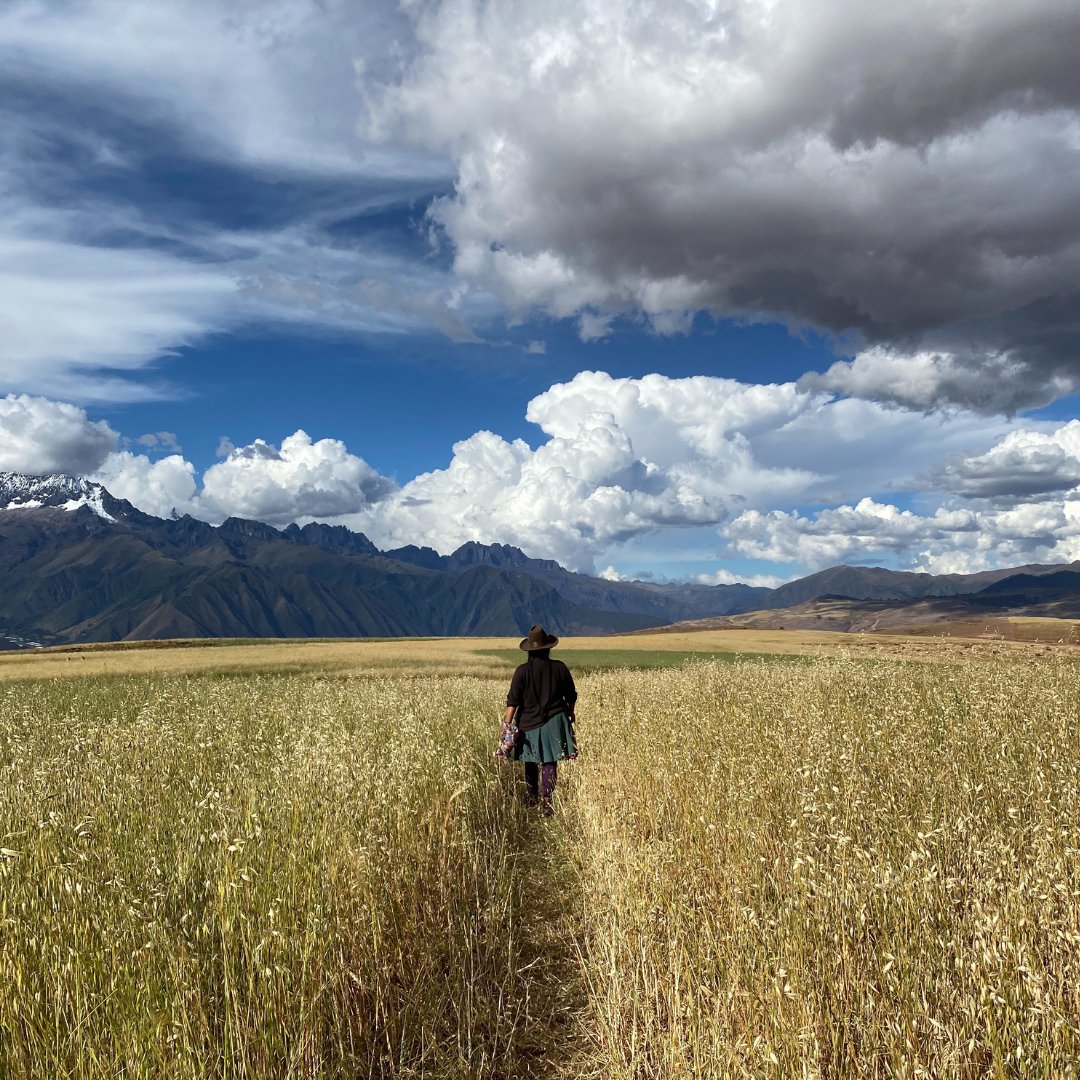 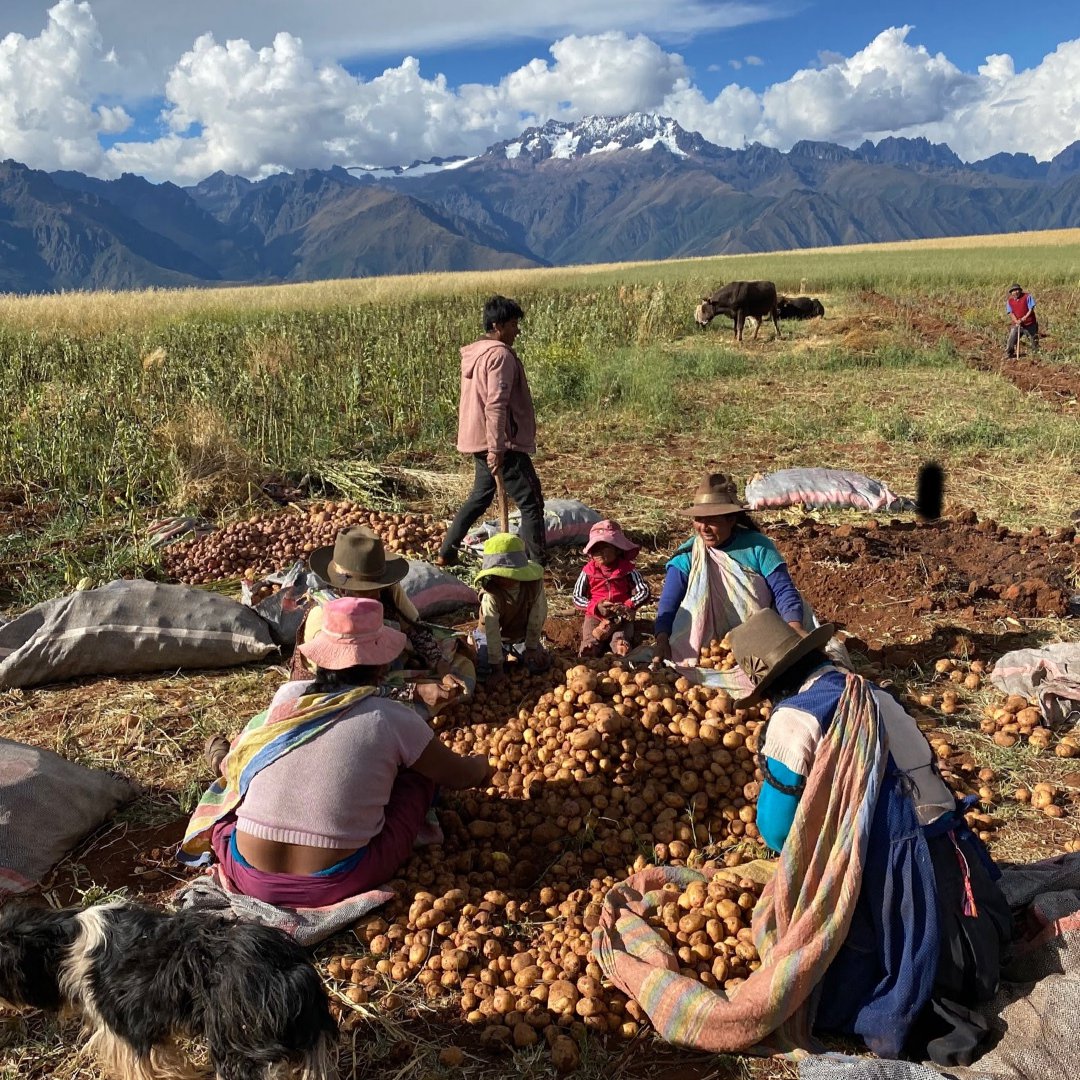 The men dig the potatoes, mashuas and other crops, while the women select the varieties and sizes of the harvest and the children help their parents with whatever they can. It is a time of sharing; the whole family is involved.

The owner of the fields is responsible for making huatia, a crucial ritual performed in the Peruvian Andes only during the harvest season in the months of April and May. It represents an important moment for all the families of Cuzco. In order to make the huatia, curpas(pieces of earth) are collected to build an oven, which is then heated with fire using the dried stalks of the harvested plants. The curpas are heated for approximately an hour and a half. The potatoes, together with other tubers like ocas, mashuas, choclos, beans and sometimes cuy (guinea pig), are then wrapped up in corn husks and placed among the layers of hot curpas. Finally, the oven is covered with earth to prevent heat from escaping. Cooking then takes approximately 45 minutes. According to the original ritual, a little chicha de jora is poured over the huatia while it cooks. 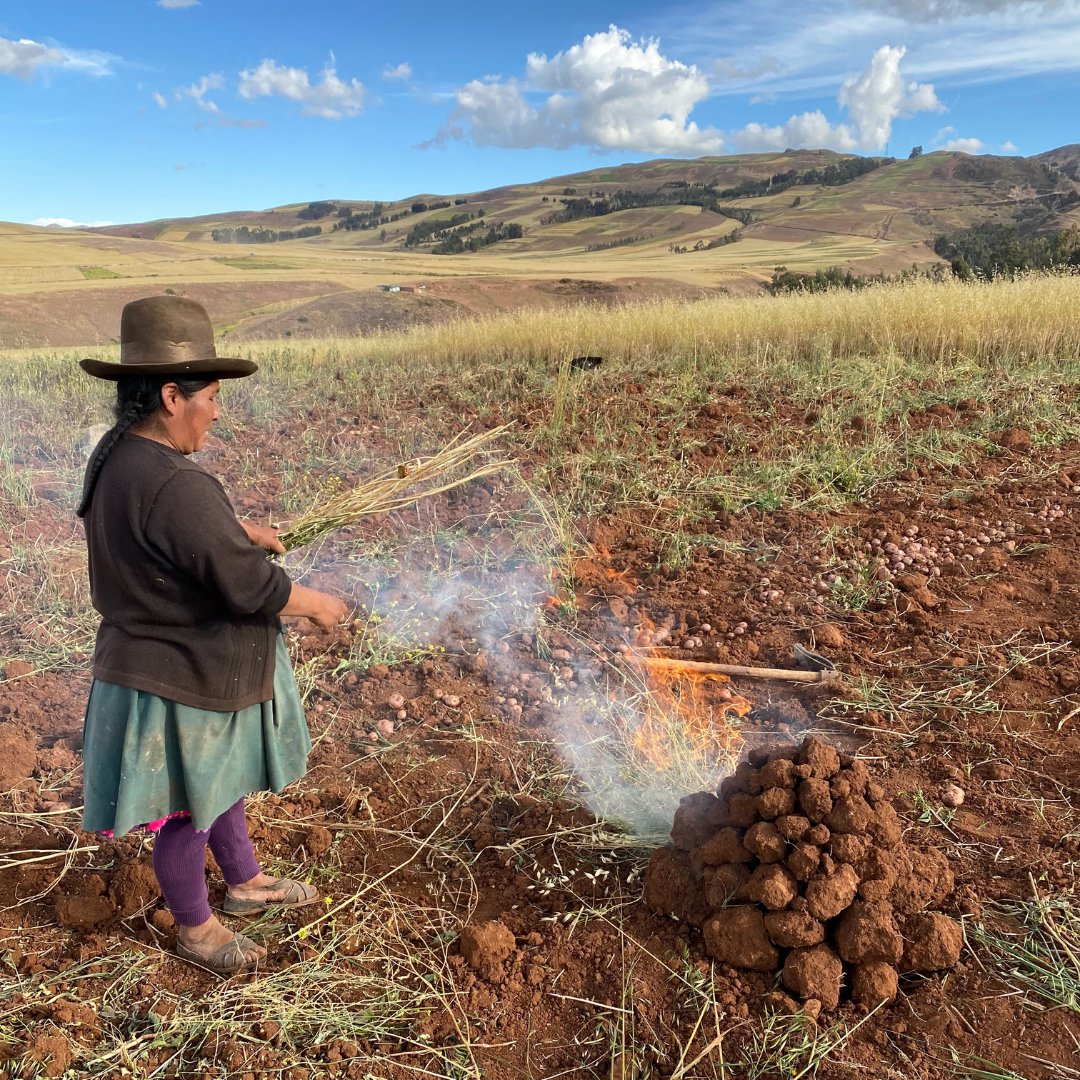 This is a moment to thank Pachamama for the harvest and wish for better harvests to come next season. The huatia-making ritual is performed only during the harvest period, as some believe that it scares away the rain. Huatia is accompanied by a delicious aromatic sauce, called uchucuta in the Quechuan language. The uchucuta is made with rocoto hot peppers, sachatomate, chijchipa (a medicinal herb reminiscent of the Mexican marigold), toasted corn, Maras salt and sometimes cheese. Uchu aji is a technique of grinding rocoto peppers using a batán (a grinding stone). The Mil restaurant has a dish dedicated to huatia, which is made by cooking potatoes in a single carved stone and serving them with the authentic Andean uchucuta sauce.

According to co-author of the Central book, Nicolas Gill:

“The different landscapes between Cuzco and Lima influence the different eating habits of the two regions. While potatoes don’t really grow on the coast, they are a regular part of the coastal diet there. Papas amarillas, flavoursome yellow potatoes, and blander white potatoes have been the standard in markets in Lima for years. Now, though, there are lots of seasonal varieties of native tubers. Rainbows of colours and a variety of different shapes and sizes. This is one aspect of a larger trend in Peru as Peruvians have begun appreciating their native foods more as a result of the gastronomic revolution of the past two decades.”

As Gill puts it, the activism of chefs like Pía León and Virgilio Martinez at Central stems from using these incredible indigenous ingredients and highlighting the work of farmers like Manuel Choqque in Cuzco (also mentioned in the 50 Best list) and Edilberto Soto in Ayacucho.

Central is usually seen as a special-occasion restaurant for Limeños. During the Covid lockdown, Martinez saw the restrictions as a unique opportunity to create something new – so he adapted the menu, making it shorter and altering it to appeal more to local customers.

These changes, aimed more towards Limeños, encouraged more locals to visit the restaurant. “It’s a cultural thing,” Martinez explains. “My generation were not able to visit the Amazon so we don’t have that deep understanding of what authentic Peru is. We were just limited to Lima.”

Martinez had initially been worried that no-one would come even when his restaurant reopened, as his usual tourist flows had been blocked. But in fact, his savvy moves meant that the opposite happened. “After lockdown, local people started to come to the restaurant for a meaningful experience. They would spend hours here, which was quite unexpected given the usual mentality of local people.”

These satisfying results were earned by the restless activism of the chef and his team. The newfound readiness of locals to appreciate a gastronomical experience ‘beyond the plate’ marks a new era of fine dining, based on a sense of responsibility and a sincere passion for a real impression.