Paco Morales, the story of a "extraordinaire" chef

One of Spain’s most progressive avant-garde chefs, has chosen to create his own unique world, inspired by the unprecedented glorious and unique times of Al-Andalus.

Chef Paco Morales decided to try something new. He studied and explored Andalusian cuisine in order to redefine it century after century at Noor. Starting in the 10th century (Caliphate of Cordoba), recovering the flavors of the three Taifa Kingdoms in the 11th century, to the heritage of the Almoravids and Almohads Empires in the 12th and 13th centuries, followed by the Nazari Kingdom in the 14th century, and finally landing in the New Andalusian World in the 15-16th centuries.

Introducing a cuisine of this type was a significant step forward in the western part of the world. Noor was the first to introduce not only history, but also the ingredients of the Arab world of Al-Andalus and reimagining them in western cuisine with the kitchen filled with erratic andalusian roots. 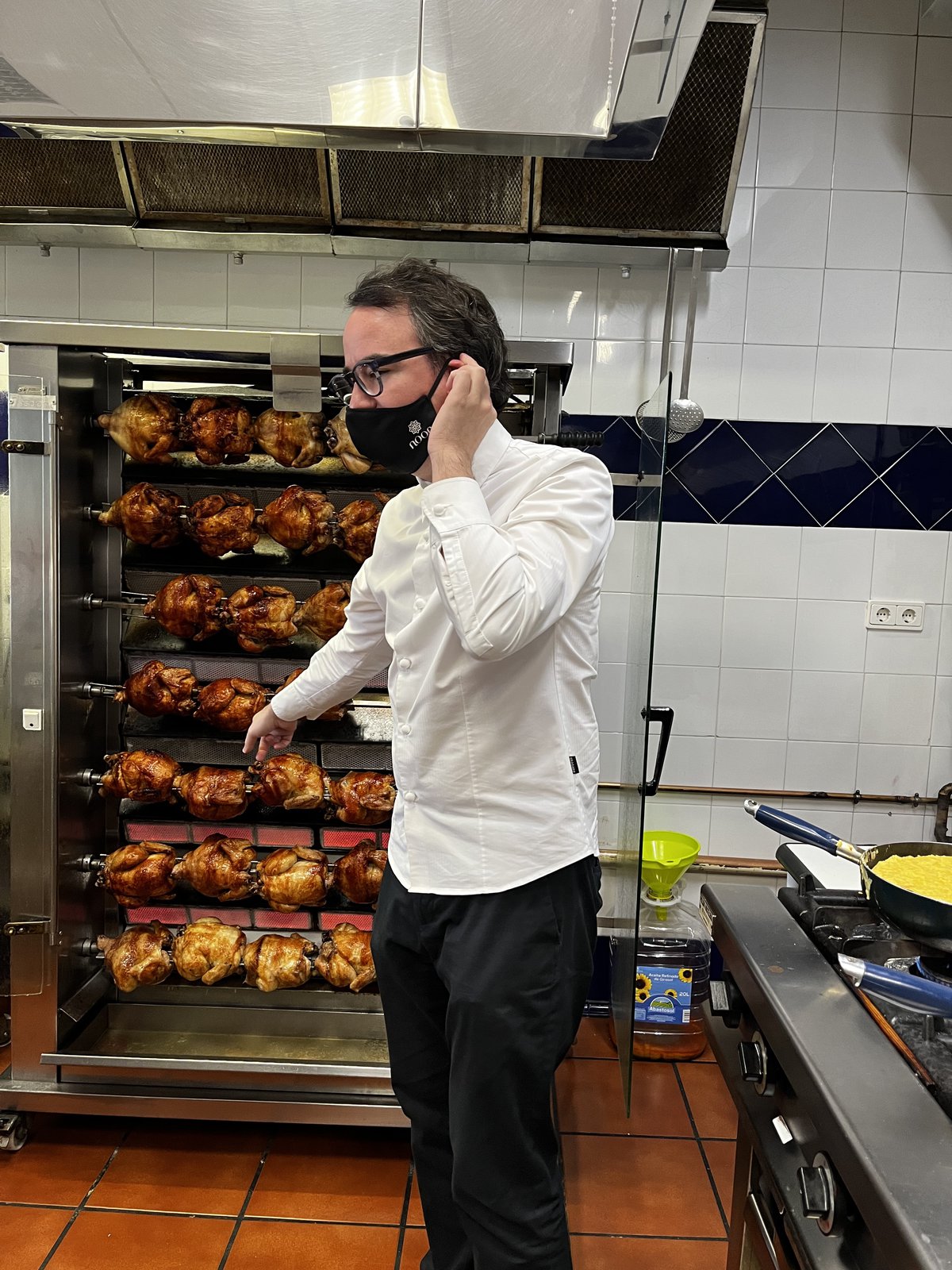 Paco Morales in his father's rotisserie "The Asador de Nati"

Before delving deep into the gastro-cultural research of Andalusian food, Paco Morales made his first money working in his father's chicken rotisserie, The Asador de Nati, a modest eatery that offers 300 roast birds a day opened on Miguel de Unamuno street, less than an hour from Córdoba. He was preparing Carilllada del cerdo, his father's traditional recipe for a pork stew, and he was making the pizza dough by hand because the machine had broken. According to his father, this was the point at which he decided to pursue a career as a chef.

Later, in 1999, he honed his skills in some important kitchen arts that had a decisive influence on him, such as Guggenheim Bilbao. Morales learned a lot of cooking techniques as well as discipline at Mugaritz, where he ended up in the R&D department, concluding with El Bulli getting involved in the creative processes of Spanish giants such as Ferrán Adrià. Paco Morales has decided to challenge himself in Noor by using only ingredients from the 10th century rather than those from the new world. It's a creative exercise to introduce Arab history, century by century, without using tomatoes, for example, which became available only later on.

He intends to tell the story in stages, beginning with the Andalusian cuisine from the 10th to the 13th century, ending with the New Andalusian World of the 15th and 16th centuries.

Paco describes the first five years as a gastronomic dessert with no noble products, which could be used to stay strictly relevant to the historic contest. What was created is a cuisine that catches everyone's attention, and the restriction encourages creativity. 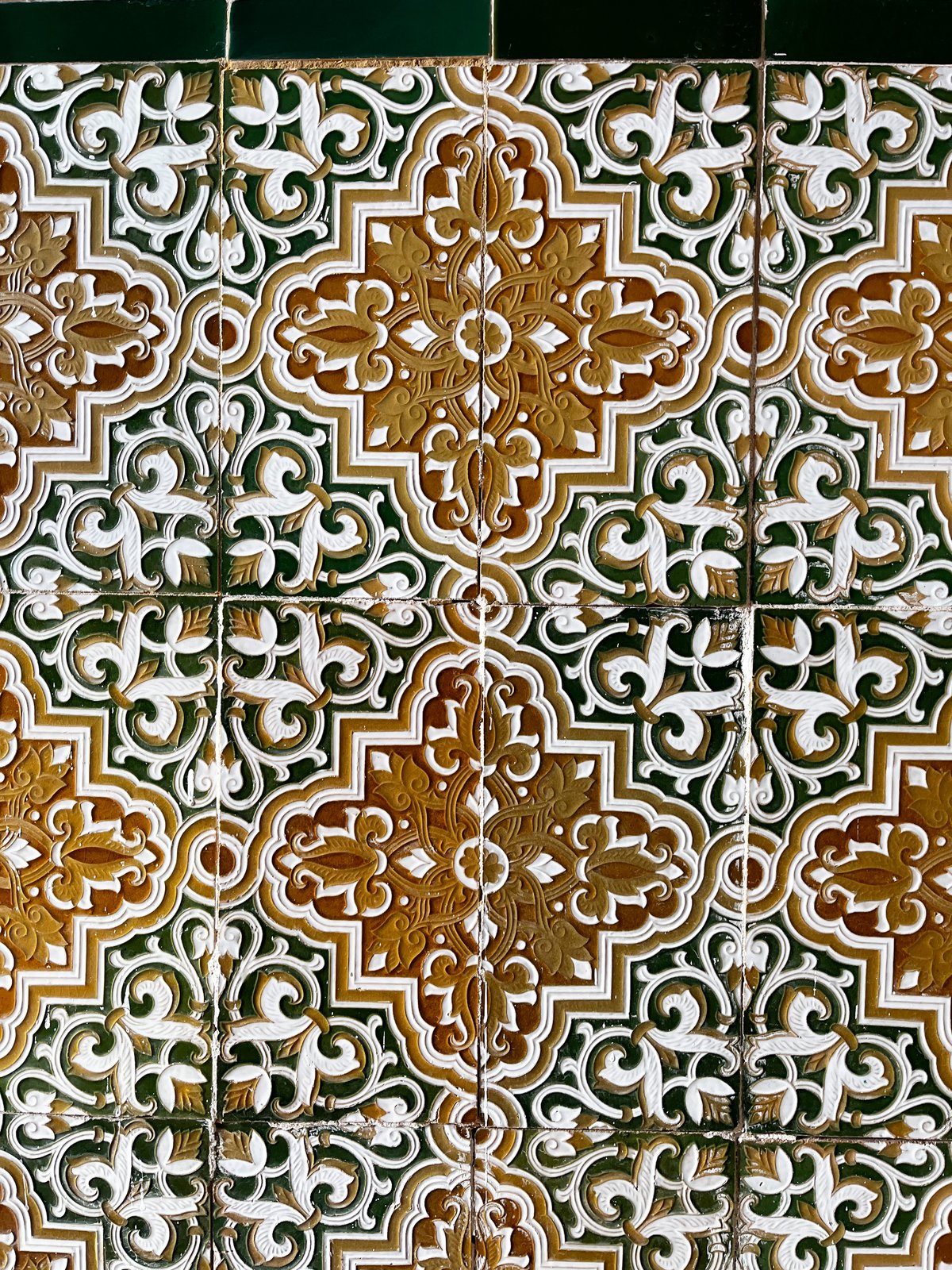 "When we enter the comfort zone we should be alarmed if we are still able to satisfy the guest. It's like in a football team, it's hard to achieve excellence if football players are not constantly worried and thinking about how not to lose the game, that is where the difference is between the top level teams."

Morales is obsessed with the idea of being first, seeing things first, and predicting events in order to succeed. His extensive research into the Al-Andalus world was carried out with the assistance of Rosa Tovar, a cook, researcher, and writer who is completely dedicated to gastronomy. Their investigation included the ingredients, techniques, rituals, and ancient recipes discovered in manuscripts written by Ibn Sayyar al-Warraq in the 10th and 13th centuries, as well as recipes originating with Caliph Al-Ma'mun, the inspiration for the Arabian Nights tales. Also, manners of the upper classes in relation to food at the time.

The city of Cordoba is very much expressed at Noor, from the ceramists, goldsmiths, and leather craftsmanship, to all of the decorative elements in the restaurant, which are all made by local artisans. While strolling through the ancient city's streets and admiring its magnificent iconic architectural treasures, one notices how the decorative motifs are replicated in the plating. For example, the design of the Puerta de Perdon in the Cathedral-Mosque has been preserved in a special mold that is filled with dough and deep fried.

As part of the total immersion into the world of Al-Andalus, the choice of plates and design receives a lot of attention. The design of the plates and cutlery has evolved over the centuries explored in Noor's kitchen. The first year began with the 10th century of Al-Andalus, the time of maximum splendor of this epoch was marked by a colorful and highly visual deep green, orange, dark blue palette of the plates, while the following season of Taifas used a more calm palette, the following 12th and 13th century was arguably a dark period of history that was reflected in the black and white neutral palette.

Paco Morales acknowledges the importance of adapting modern technologies while surfing the historic past, saying, "it's almost an artist's job, to be able to harmonize the coexistence of ancient patterns and arabesques with modernity and gastronomy in an elegant manner, 3d printing allowed to recreate the missing parts." Noor pays homage to the cuisine of the time, but it also encompasses the entire lifestyle of the Al-Andalus world. 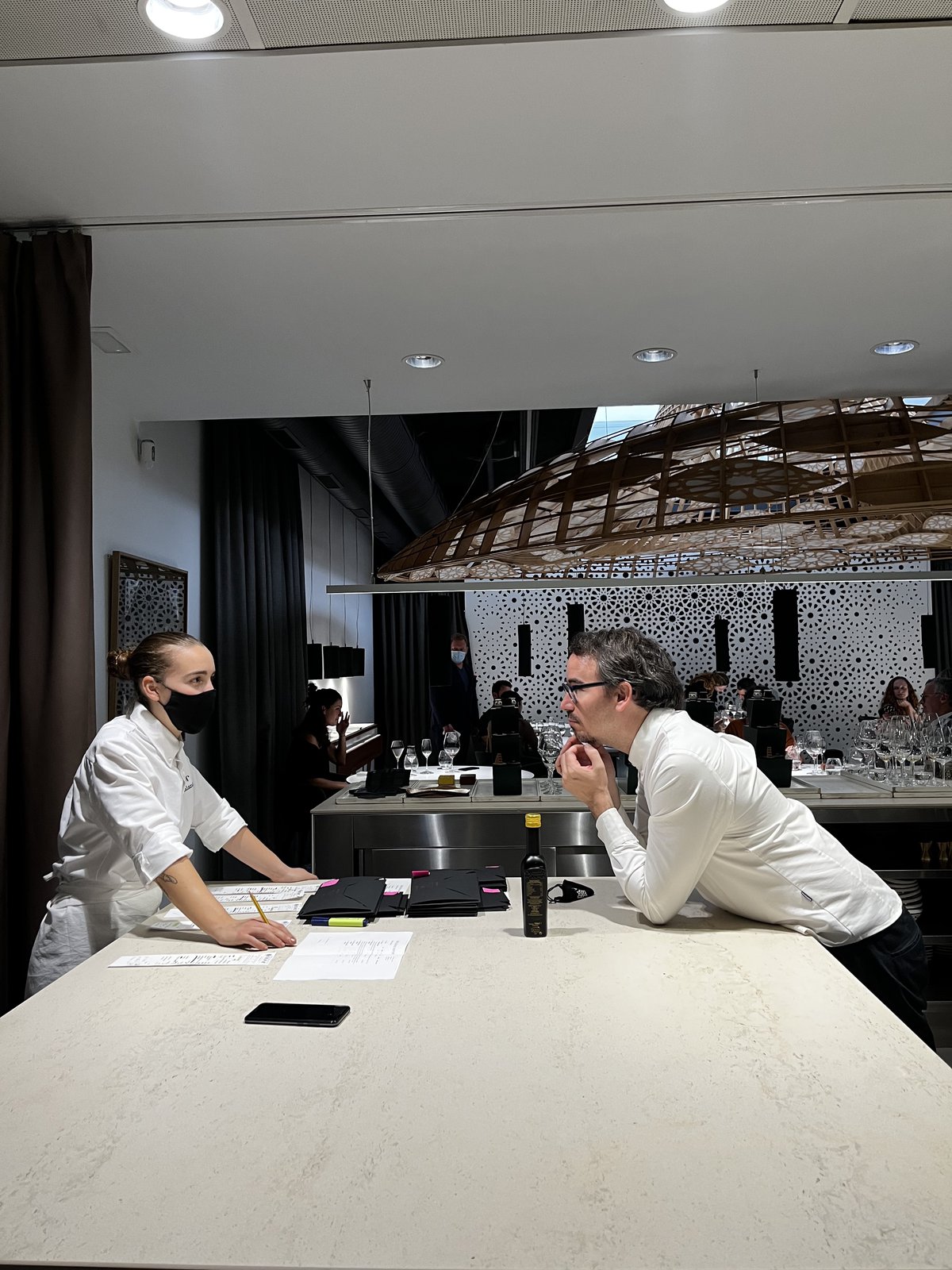 The journey into the glorious world of al-Andalus begins with a special ritual of washing hands, in accordance with the laws established by the Prophet Muhammad in the 10th century.

The dishes served at Noor are highly technical, with the limitations of the products used becoming the driving force behind the dishes, such as lamb leather, which is made with milk skin and dark lamb stock. A refreshing dish of marinated shellfish in Andalusian dressing with savannah cucumber, mint, and Pedro Ximénez vinegar that could easily be served in the 10th century, drives you back in time. Another example is Karim, one of the chef's favorite creations, which has been continuously reimagined since the second season of Taifas. 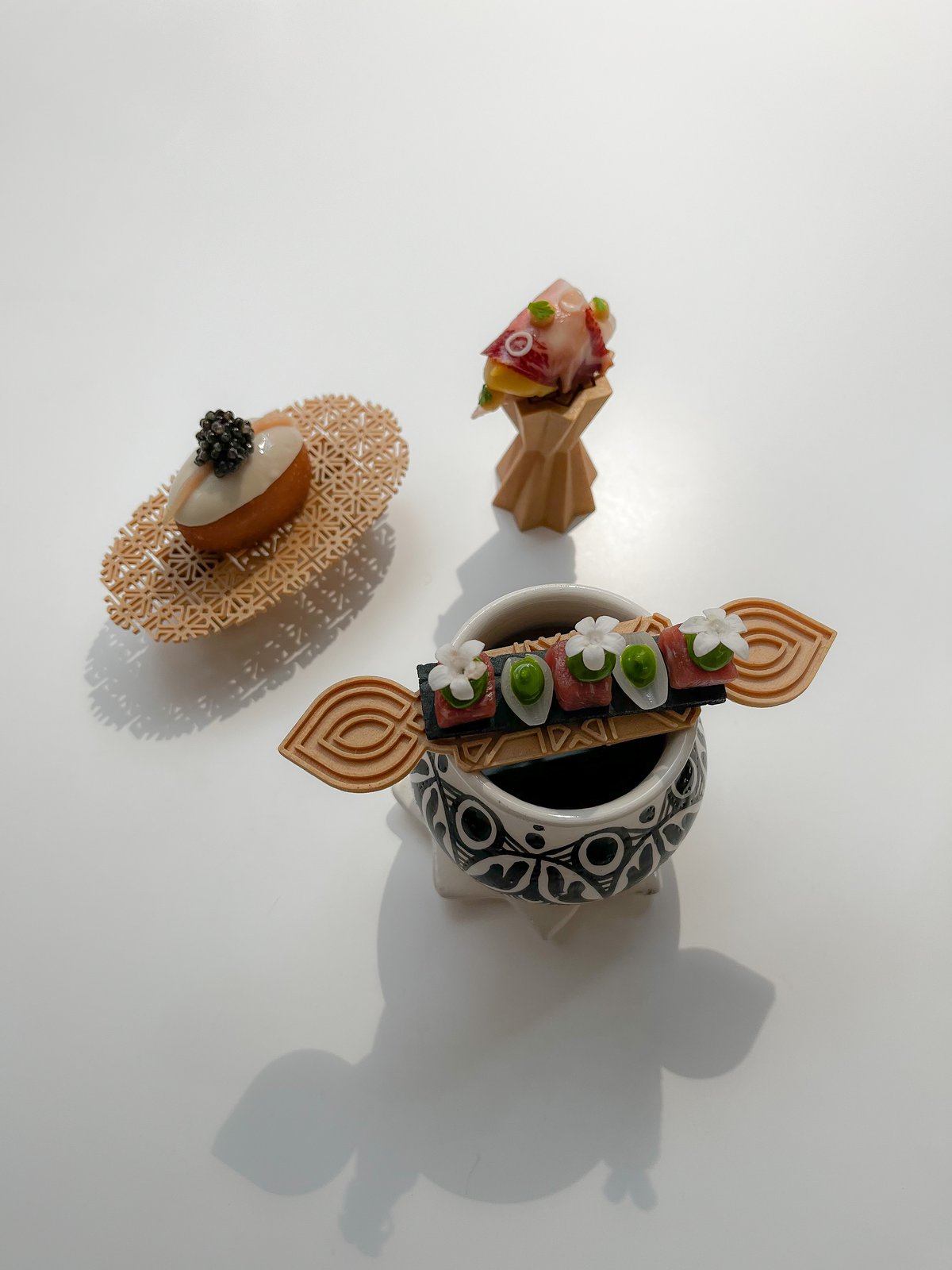 The Starters at Noor 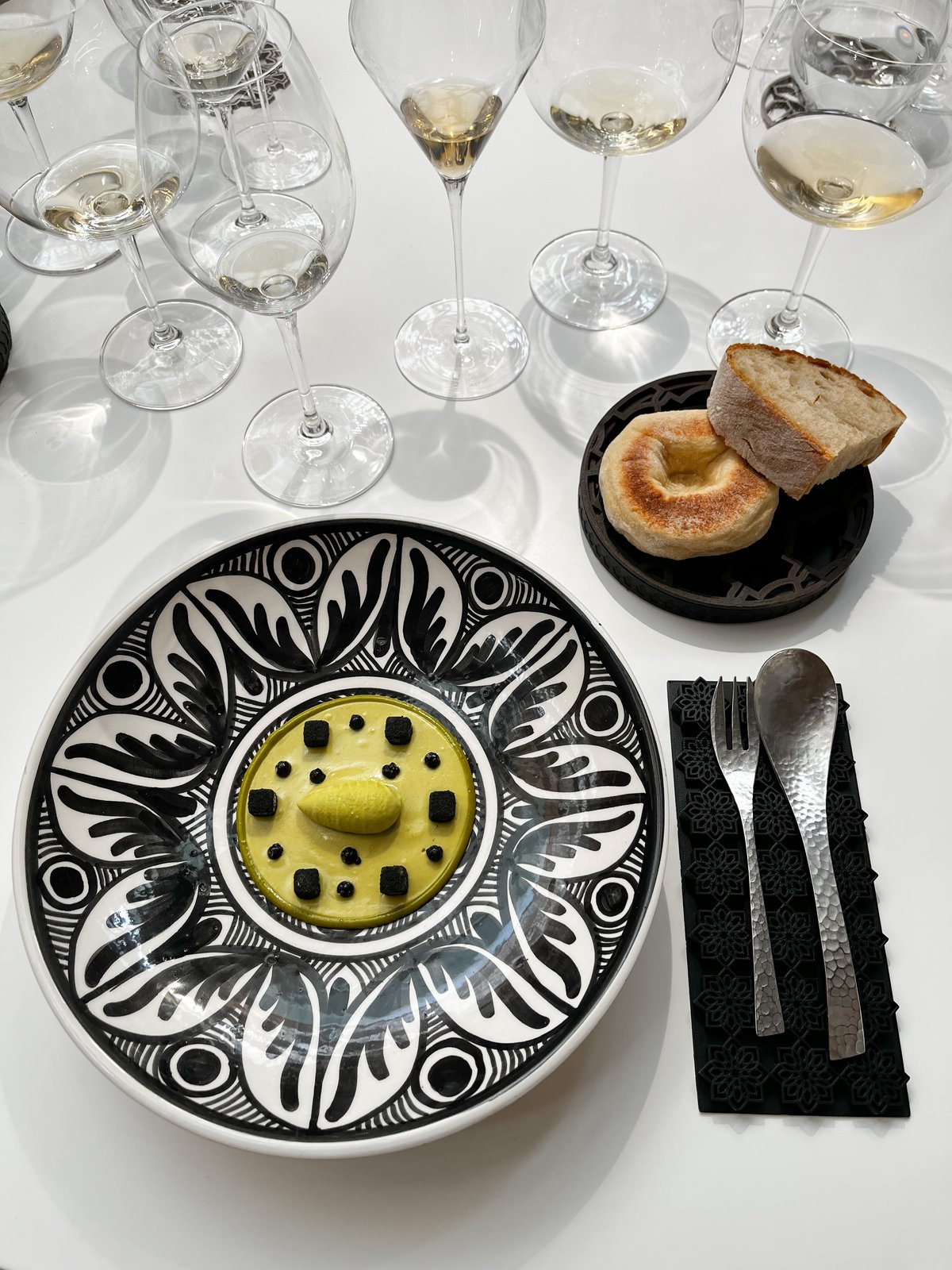 The current season is a recreation of the 15-16th century New Andalusian World. During this time, it was permissible to use ingredients such as potatoes, tomatoes, peppers, and avocados. Morales plays the Emperor's chef, who prepares this magnificent Moorish feast in the modern interpretation. One of Noor's guiding principles is to demonstrate the beauty that can be found in how the ingredient is treated and each element is arranged without overcomplicating things with innovations.

Competitiveness and the highest standards drive perfection, and this is also expected of the kitchen team. Morales described his team members as "special people with special mindsets." Noor employees must be "passionate, unconditionally believe in what we do at Noor, and have natural talent."

Paco is the one who shows what can be done better, even when it comes to cleaning dishes, and he admits to having a perfectionist streak. This is a trait he inherited from his father. This is what Noor means to Paco: it's not a job or a restaurant, it's a way of life.

The Chef’s Legacy: What will we leave to future generations?

Five great mentors answer to the question no one asks, structuring the rite of identity passage in the kitchen.