Matteo, owner of Le Tome di Villa, gathers Valchiusella's Tome to age them in his cellar, following the footsteps of the generations that preceded him, but don't label him as a cheese "refiner"! 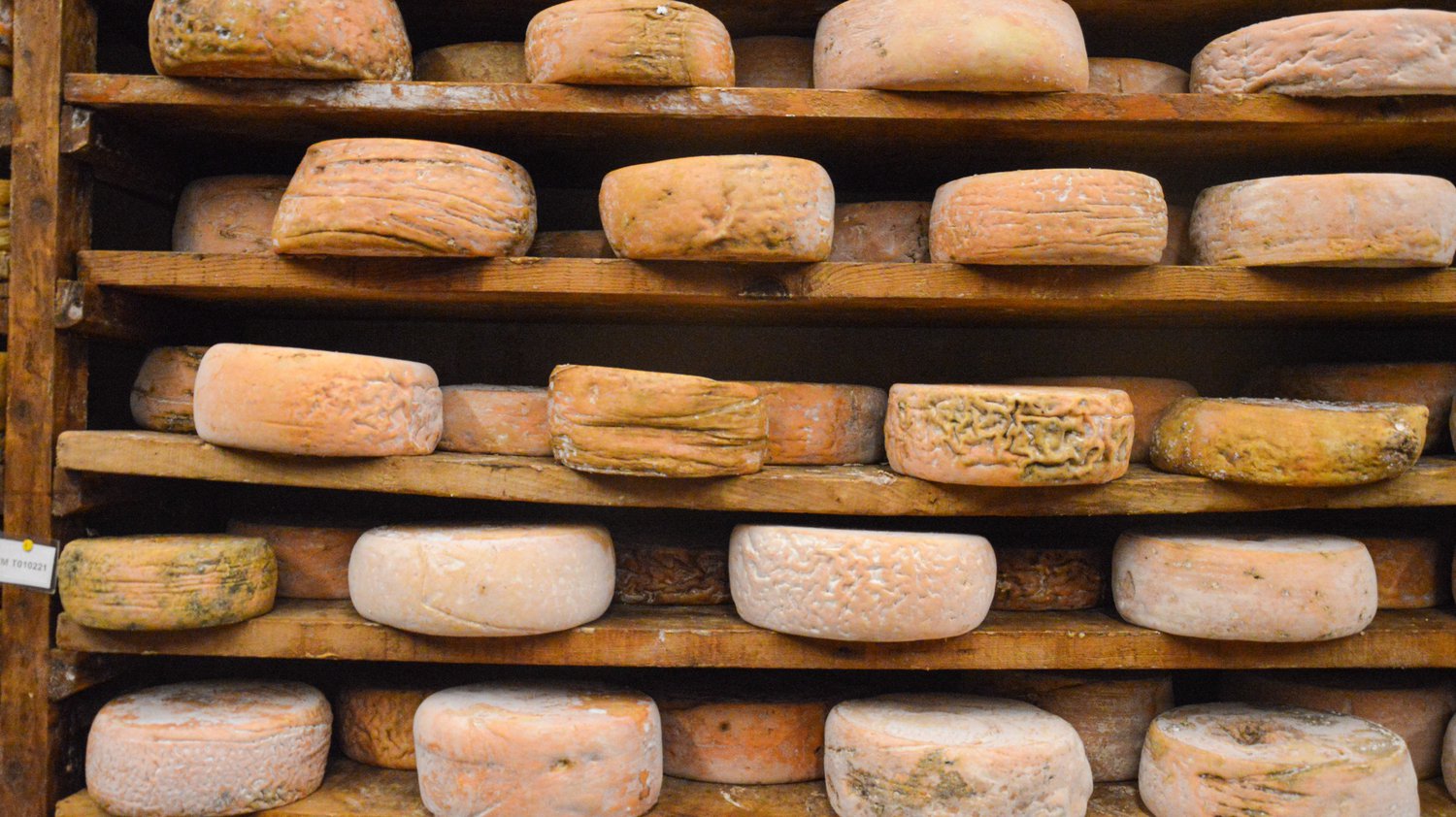 Piemonte is more than the Langhe and bustling Torino: it’s full of ancient hamlets, mountains and valleys. One valley in particular is slightly off the beaten path, and by virtue of this, home to wonderful landscapes, incontaminated nature and enogastronomic traditions. Valchiusella is a forty-kilometer-long valley stretching along the Chiusella river, dotted by wooded forests, ample pastures and baite: traditional stone buildings found in the north of Italy. Roaming around the pastures, lazily nibbling on some fresh green grass are herds of pezzata rossa, an indigenous dairy cow species. Along the valley you can find families that have been producing milk and cheese for generations, as well as younger people who moved to Valchiusella in search of an alternative lifestyle as cheesemakers. Each cheesemaker has his own cows. The number of cows varies between twenty five, like Olga, to more than seventy, such as Beppe, who involved his whole family into the business. The cows are milked by hand, so the number of cows that each cheesemaker has is directly proportional to the number of people who work in the azienda agricola.

Whether they’re newcomers or families who have inhabited Valchiusella for generations, a shared passion for a challenging lifestyle unites them. Their daily life takes place in the midst of steep pastures and summer storms, in order to allow their cows to produce the best quality milk. Dairy cows cannot eat just any grass, they nourish themselves with grass that is just about fifteen centimeters tall: still tender yet full of nutrients.

Matteo, owner of Le Tome di Villa - a small family-run business which has been collecting, aging and selling Valchiusella’s tome for generations - takes the time to passionately illustrate the story of this unique cheese. 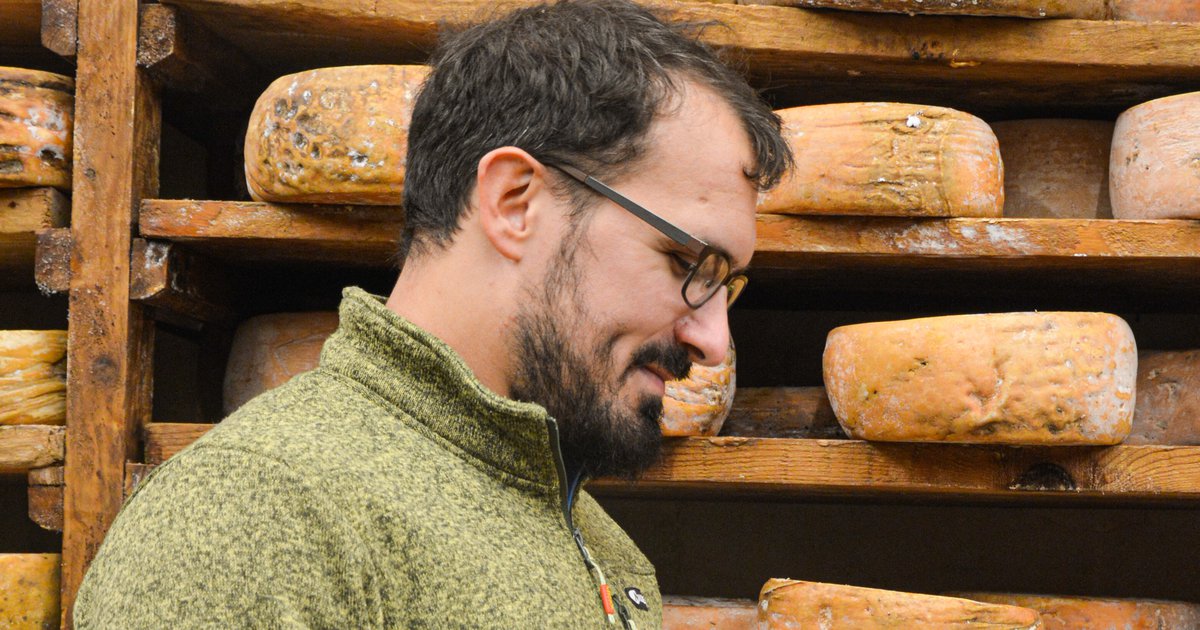 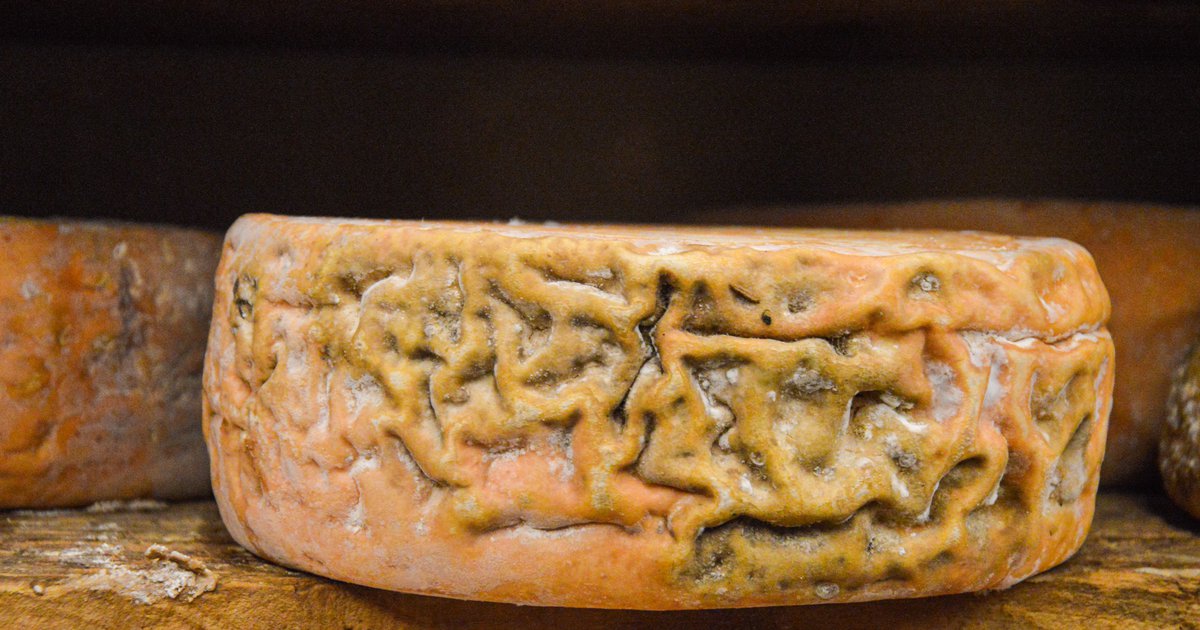 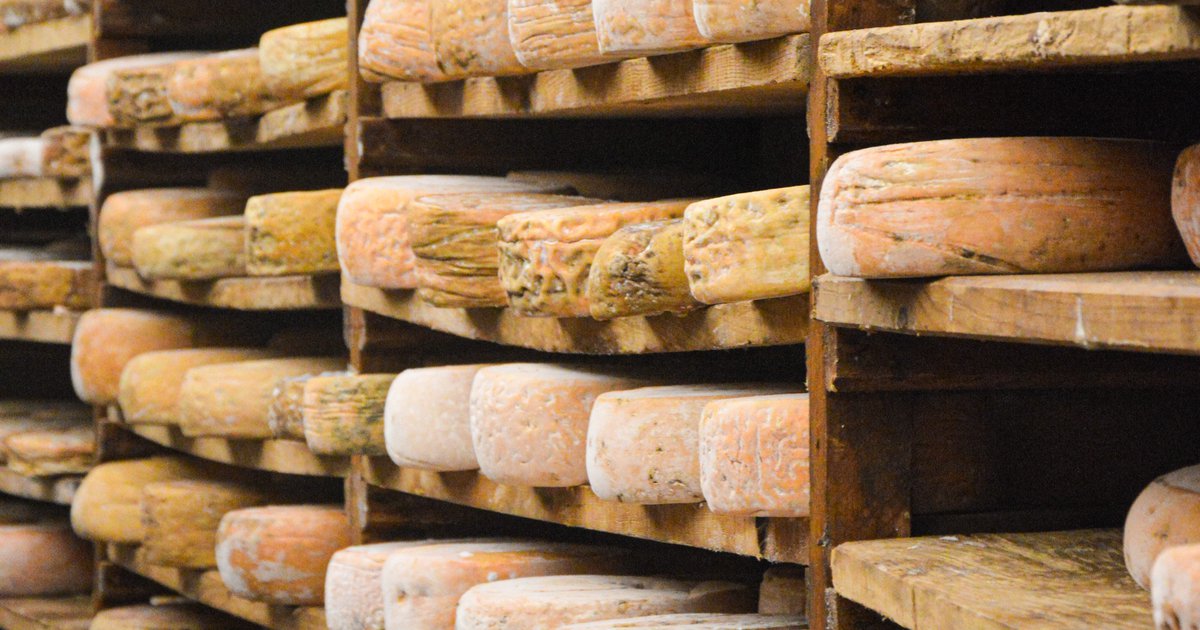 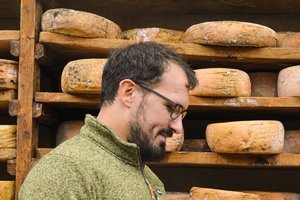 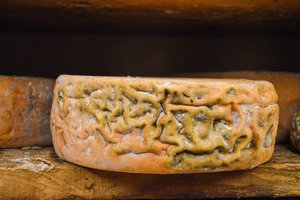 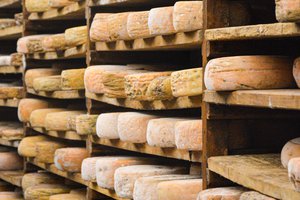 La Toma is a soft or semi hard cheese produced entirely from raw milk, between the regions of Piemonte and Valle d’Aosta. It is mostly sold after an aging period of sixty days, although Matteo firmly believes that a mere two months of aging are not enough.

Matteo’s week begins with an early rise and drive up the valley, where he collects the newest tome from every producer he works with. Some walk down to meet him whereas others, who find themselves in the highest and most remote pastures, use a pulley system to send him their fresh cheese. Each producer makes cheese with a slightly different milk, from whole to semi-skimmed or skimmed - which is all skimmed manually.

Once back at his base, Matteo places the new tome on shelves just outside the aging cellar, where they spend a few days getting acclimatized to the lower temperatures (which are still nothing compared to the four degrees celsius of the aging cellar!). A few days of sitting prevents the cheese from suffering from a thermal shock, which would occur if it were placed directly in the cellar. In the meantime, Matteo must tend to the rest of the tome that are already in the aging cellar, which in summer consist of up to six thousand, each toma requiring manual, bespoke treatment.

The single-most important element of a cheese aging cellar is its atmosphere. In Tome di Villa, the cellar’s temperature is four degrees with an extremely high percentage of humidity, which is the perfect balance to allow the tome to undergo a steady evolution. Once their aging phase is complete, Matteo moves the tome to a neighbouring cellar with the same temperature but significantly less humidity, where they age at a slower pace and without a noteworthy evolution.

Matteo’s main role, as cheese collector, ager and merchant is to take care of each toma, to ensure that they all age without drying out and maintain a manageable crust. His entire knowledge is based upon experience and know-how passed down through generations, allowing him to comprehend a cheeses’ state of evolution just by observing and touching it. He washes each toma with water and salt on a weekly basis, to remove any potential harmful bacteria, allow for a more homogeneous evolution and to maintain a healthy crust. The colour of a cheeses’ crust is directly related to the conditions of the cellar it lives in and the treatments it undergoes. By observing the tome neatly organized in Matteo’s cellar one can notice that every cheese has a similar colour, even though they’re all produced by different cheesemakers. The chromatic similitude is the result of each cheese undergoing the same treatment. 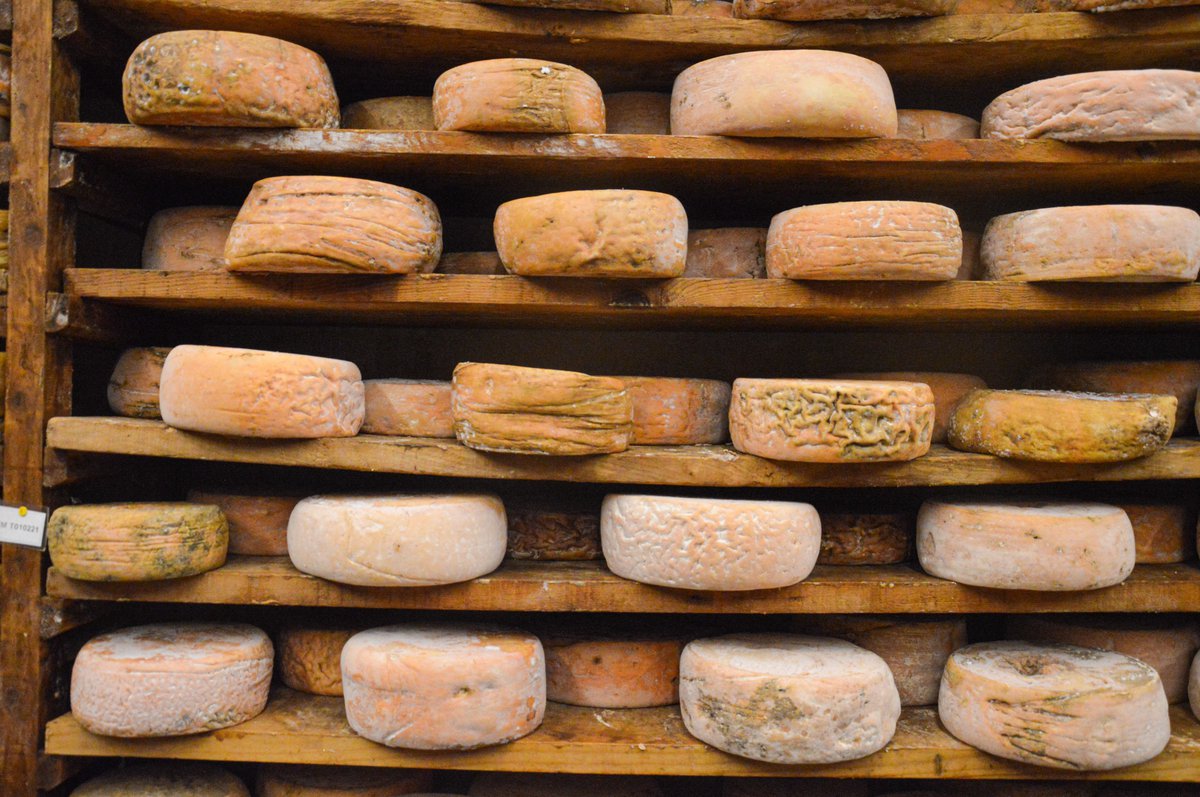 To conclude the visit, Matteo guides us through a detailed cheese tasting, and the first step is grasping which factors influence the colour and consistency of a toma. One of the most important steps of cheesemaking is the addition of rennet (or curd) which allows the milk to coagulate and, essentially, transform from liquid to solid. The process takes place in pastures, and cheesemakers are free to choose the degree to which they heat up the curd before adding it to the milk. A higher temperature curd results in a harder cheese, a consistency which is also gained by aging cheese for an extensive amount of time - during which a process of dehydration takes place.

On the other hand, the colour of a cheeses’ paste (the inside of a cheese) is entirely dependent upon what type of food the cow who produced the milk ate, which varies from dry hay to fresh grass or fields of flowers. This explains why tome produced between December and March are so similar, due to the cows being in their stables and eating primarily hay. The difference between each producer is significantly more evident in cheese produced between April and October, months that cows spend grazing in pastures, in which ample diversity is found. During summer months, cheese made by the same producer can vary every single day, a fact which depicts how impactful and vital diversity of feed is.

When observing attentively the shelves lined with tome in Matteo’s cellar, where each column encases the cheese of a different producer, you begin to notice some similarities. Some of the producers in fact belong to the same family, siblings or sons and daughters who set off on their own. Although none of them produce the same identical cheese, the similar techniques they employ, passed down to them by previous generations, are evident. Matteo explains that “the technique one uses to produce cheese is fixed, it is like one’s calligraphy, once learned, it sticks forever”.

For this reason, Matteo decided to name each toma with the name of its cheesemaker, to highlight the vast diversity of Valchiusella and the people that live it, and to celebrate the ever more rare art of craftsmanship.