Merlin Labron-Johnson: "Vegetables allow us even more possibilities in the kitchen" 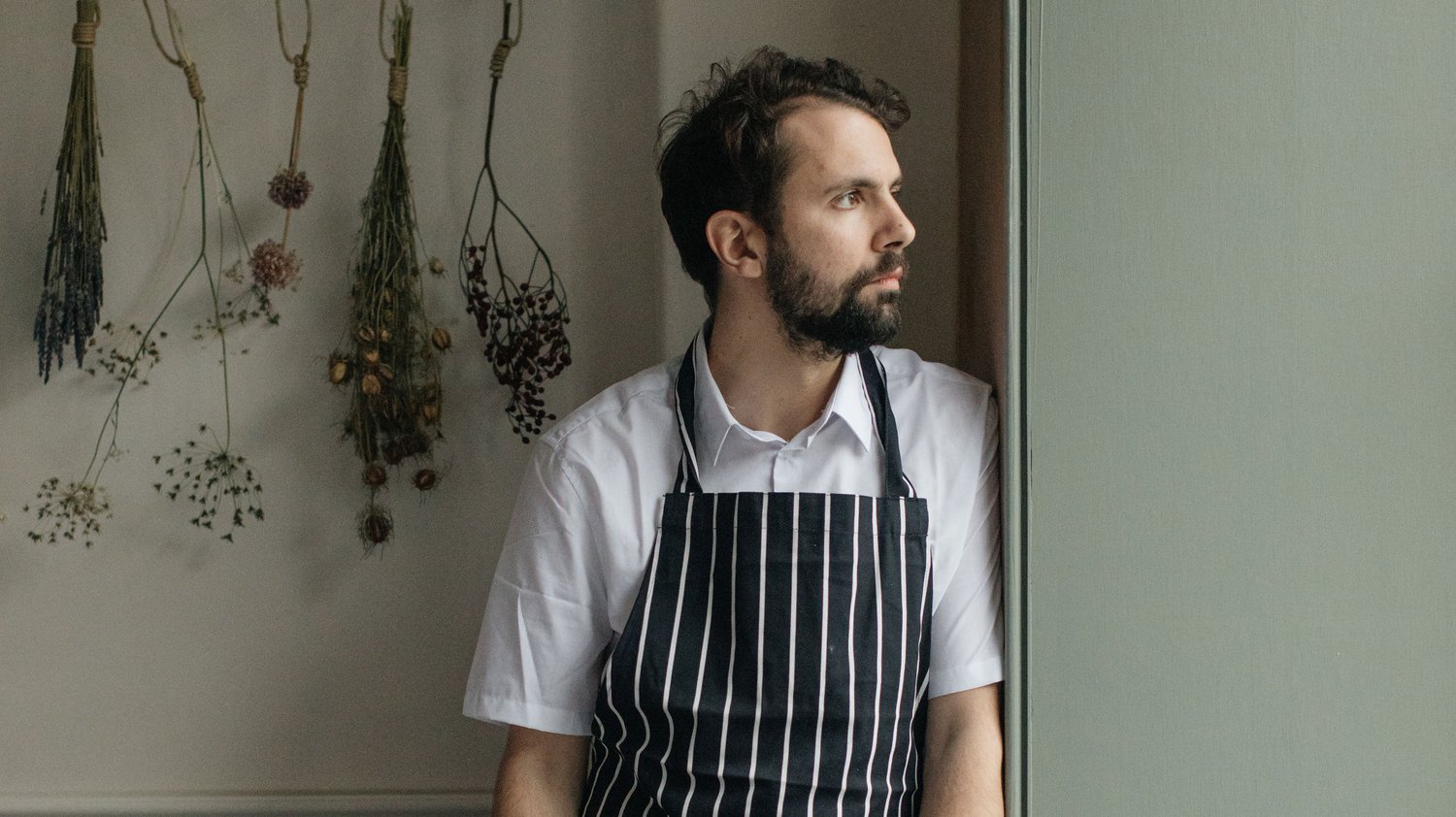 British chef Merlin Labron-Johnson found his culinary fame at a very early age, being the youngest chef ever to win a Michelin star in the UK at the age of just 24. A well-deserved accomplishment that hasn’t left him resting on his laurels, as he continues to innovate and win further awards for his cuisine.

Not long after this success, he became yet another one of those young chefs who trade the big city life for the sensibility and opportunities of the countryside, a unique setting that becomes a great source of creativity. He takes whatever’s ready in the garden and elaborates on it, for two of his no-fixed menu venues; Old Pharmacy, a casual dining restaurant, and Osip, a more refined venue, both located in Bruton, Somerset. However, this courageous chef hasn’t turned to the countryside to relax and take it easy, his sense of adventure pervades everything he does, and that’s why Merlin Labron-Johnson is continually breaking new ground and drawing much positive media attention.

Even though Somerset-based Osip was awarded a Michelin star last year, chef seems to be most happy just being at peace here. “I take pleasure in just being able to do what I’m able to do day-to-day” he tells us. Adding that he also has fun converting staunch meat-eaters into enjoying delicious local vegetable-based dishes and constantly exploring the limits of his own-grown produce.

Chef Labron-Johnson reflects on his joy of practising organic growing, how countryside living sparks creativity, his hopes for a more ethical hospitality system and why he considers his head gardener one of his mentors.

What is currently inside your empire?

Connected to Osip we have a relatively new restaurant called The Old Pharmacy, which started o as a one-stop-shop for visitors to pick up goods from our farm and other local suppliers, but has since turned into a wine bar / bistro inspired by rural France and Northern Italy. We serve a variety of dishes that celebrate traditional country cooking; quite often they are small plates designed to be shared, and handmade pasta is a mainstay. The wine list is mainly organic and celebrates interesting producers that we love.

How do you organise the management of the garden and the suppliers?

At Dreamers Farm, one of the plots we grow our own produce on, we cultivate vegetables and crops that supply both restaurants with hyper-local produce. Whatever’s ready in the garden becomes what we serve at the restaurants, making it a very uid dialogue between kitchen and farm as to how the menus take form. Our local suppliers in turn tend to be individuals we have had long-standing relationships with, allowing us to work very closely with them and hero their brilliant products in our menus, whether it be cheese from Westcombe Dairy, venison from Matt the hunter or one of our favourite Somerset ciders. We want to understand the provenance of everything we cook and having these close relationships allows us to do that.

What was the key moment where you realised to move out from London ?

I grew up in the West Country and have always felt drawn to the area. I knew working in London that I would want to return to something quieter at some point and I've loved forging relationships in the Bruton community since I opened Osip. It was just a matter of nding a site to build from and me feeling a strong enough affinity with it. It is tranquil here, but one thing that has surprised me, in a nice way, is that Bruton has such a bustling creative community, who have been so supportive in all that we’ve done so far here.

Have you ever regretted your decision?

There are elements of London life that I miss, including being part of the rather special hospitality community, of which some of my good friends make up not an insignicant number. I’d never regret it, though. What I’ve gained by moving here, both professionally and, for want of a better word, spiritually, I would never have been able to by staying in London. In terms of my day-to-day, nothing much has really changed, other than now, I just have a closer relationship with the countryside, rural life, and ultimately, the food that I cook. I was missing this relationship in the city. As a London cook, you have access to basically any ingredient in the world, on any day of the week, all year round. I found it hard to be creative in that environment.

Nowadays we're seeing more and more chefs putting vegetables at the center, some of them following the trend, others taking it as a logical step forward, what do you think about that?

Lockdown was so edifying because it seemed to really alter the way that lots of people cook and understand food. For me personally, it was testament to the ethos of produce-led cooking using hyper-local ingredients. When the world was in a state of chaos and we were no longer able to rely on our usual sources of trade and supplies, it became a visceral experiment for us to cultivate a plot of land that would hopefully be self-sustaining. I learned so much during that period - in particular, how curating a menu based around the vegetables we grew was not only the logical thing to do, but also a necessity. In terms of it being the future, I’d say that you can have harmfully-grown vegetables, just as you can have harmfully-reared meat. The key, if you’re serving anything - be it plant or animal - is to be aware of its impact; what resources have gone into it; whether it has been produced responsibly; how far it has travelled. These are questions that I always try to bear in mind when writing menus.

What do you think about vegetable-based menus, are they more suitable for the casual or fine dining?

Our menus don’t discriminate! Both Osip and The Old Pharmacy celebrate the vegetables that we produce, albeit in dierent styles. That’s all part of the fun of having two restaurants that cook in very dierent ways. On occasion, both head chefs are bidding for the same harvest of beetroot, kale or carrots, but in most cases, the teams at each restaurant are able to develop dishes that wouldn’t work at their next-door counterpart, but use a certain bit of produce to the best of its ability, keeping vegetable-related squabbles between the teams to a minimum. Dishes at The Old Pharmacy allow us to use our produce in a very simple way, exhibiting how fresh and beautiful everything is; current examples include celeriac remoulade and leeks vinaigrette – everyone’s tasted the classics, but rarely with ingredients this good. On the other hand, a lot of the fun that we have at Osip lies in converting staunch meat-eaters. And we do use meat, don’t get me wrong, just not in huge quantities. Before opening Osip, I came to the conclusion that to me, there’s really not much you can, or rather should, do to meat besides cook it incredibly well. Vegetables almost allow us more possibilities in the kitchen, and during out ways to best and most creatively utilise their characteristics for a dish, often by using animal products in a supporting role, is what we really and inspiring. 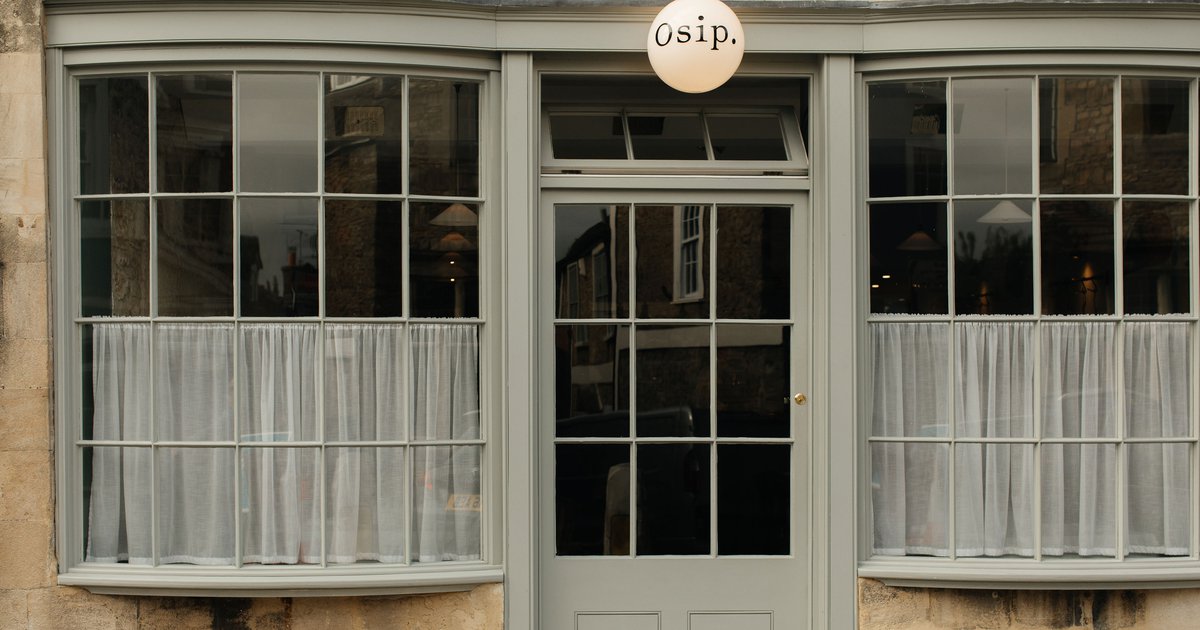 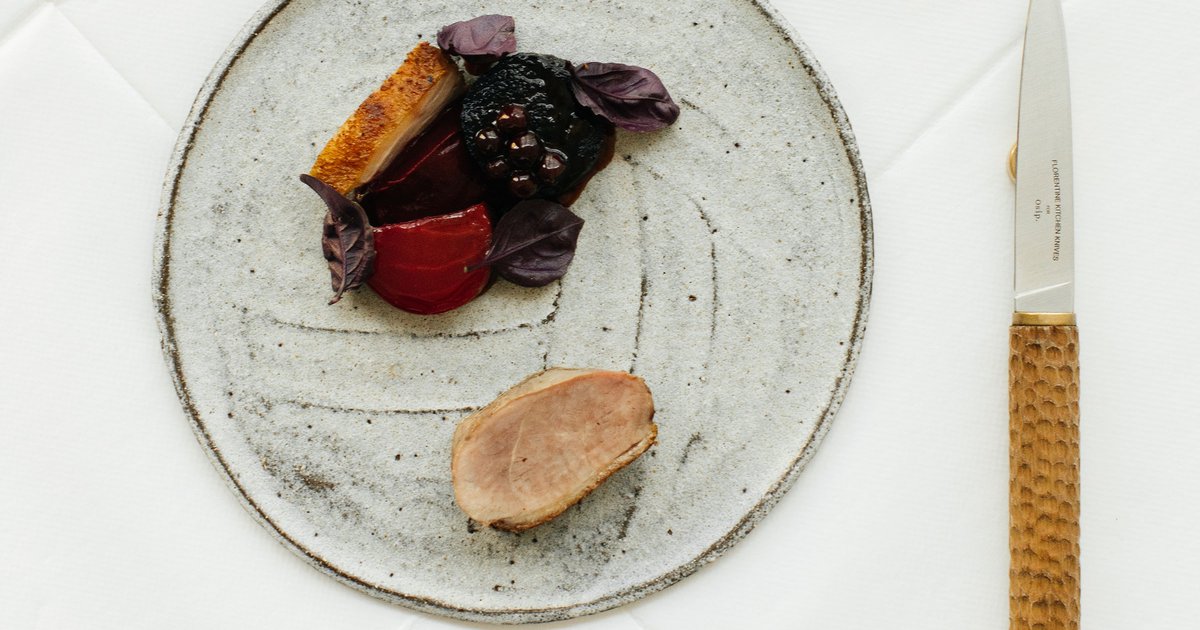 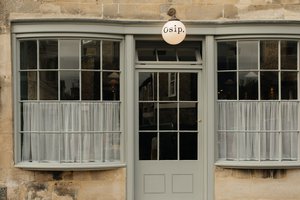 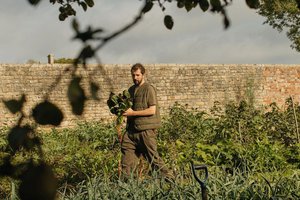 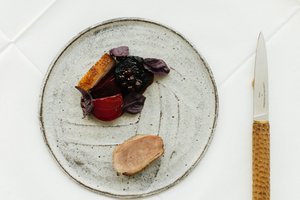 How do you define your personal success?

I take pleasure in just being able to do what I’m able to do day-to-day; I think any chef is grateful if they get to a point where they get to meet very interesting people and full themselves creatively. Furthermore, to have two restaurants that employ a great bunch of people, and provide them with really valuable experiences, to me feels like a success in itself.

There is denitely the side of ethics that this interview has covered thus far: being aware of the food you’re serving in relation to its place in the wider world, and the impact that certain culinary decisions have on the environment. I think there’s more to being an ethical chef than that, though, and the world of hospitality is changing for the better, with fairer pay and gradually more nurturing working environments for sta. It’s much harder to inspire a work force if they’re physically and emotionally exhausted; I think there’s a new generation of employers in hospitality who are realising this.

Who would you consider your mentor?

My usual answer to this question is my old head chef and founder of restaurant In De Wulf, Kobe Desremaults, to whom I owe an inordinate amount, inspiring the way I think about food, foraging and a restaurant’s sense of place. However, in the spirit of variety, I’m going to name a gentleman called Harry the Fish in this interview. Known for his love of shing, Harry is our head gardener and has been vital to all we do here in Bruton, project-managing the build of both of our vegetable plots, and sharing with me his vast knowledge of organic growing. One day, I hope he’ll take me shing, too.