The nomadic and sustainable cuisine of chef Fatmata Binta

Born and raised in Freetown, Sierra Leone, in a Fulani family of Guinean descent, chef Fatmata Binta defines herself as a modern nomadic chef. 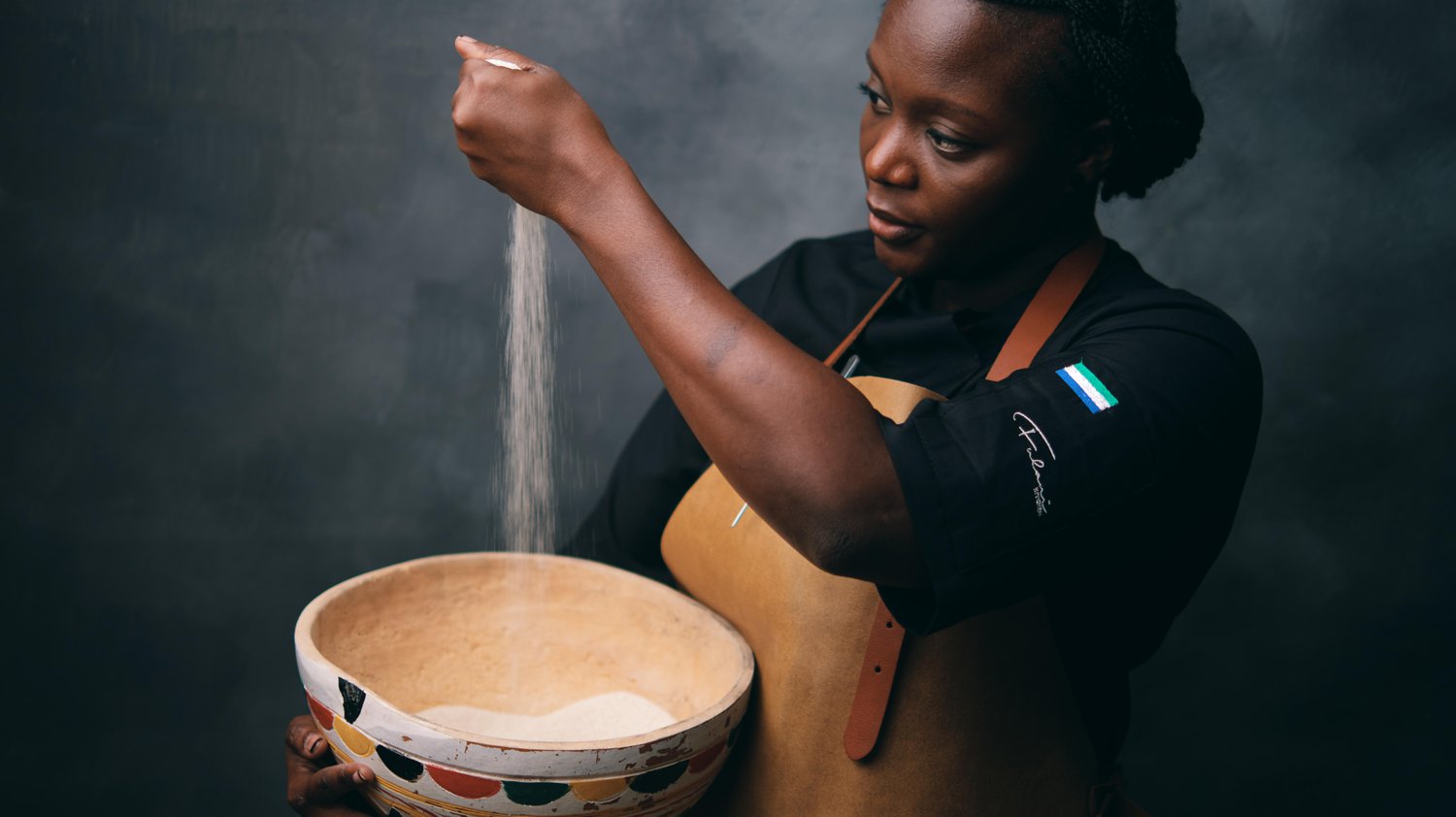 In her Fulani Kitchen restaurant, with which she travels the world offering exclusive pop-up dinners, the young winner of the Rising Star award at The Best Chef Awards 2021 wants to bring people closer to African culture and sustainable cuisine, while supporting Fulani women in their battle for economic independence and the perpetration of the culinary traditions of their tribe.

The culinary culture of the Fulani people, Africa's largest nomadic tribe, is a story of adaptation and survival that results in a conscious use of West African ingredients, flavors and traditions. Culinary features of which chef Fatmata Binta is particularly proud and that she wishes to bring into the spotlight thanks to her nomadic restaurant. "I was born in a Fulani tribe and the environment in which I was lucky enough to grow up is wonderful. I lived in close contact with nature, I learned the importance and the beauty of sharing, and from an early age, I came into contact with an immense and perfectly sustainable culinary culture that today I want to make known to as many people as possible. Through my work, I want to tell the stories of the Fulani people, share their culture and make sure that they will no longer be seen solely and exclusively assimple herdsmen but also as a population from which to draw inspiration,” she says." Their sense of community and their way of living have been very important for me and my personal and professional growth, and in Fulani Kitchen I decided to invite people to fully live the journey I propose to them, leaving their shoes outside, sitting on communal floor mats, sharing food and using their hands as cutlery”. And of course, cultural immersion also passes through food. “I propose meals made up of 90% grains, roots, vegetables and what would commonly be classified as waste or non-noble ingredients. In addition, my tasting menu changes every day, because just as the tribe varies its food depending on where the caravan settles, I adapt my dishes to the place where I am actually cooking them. It’s one of the basic concepts of nomadism”.

And nomadism is part of chef Binta's DNA. In fact, from a very young age, for political and historical reasons, she learned to change abode very often, adapting to every type of situation and living off what nature offers. “I was born into a very large family and one of the most vivid memories I have of my childhood is that we kids were always an integral part of the culinary process. We went to the market, and we helped set the table and cook. Food played a central role for us. It was like a game, but for our parents it was also a way of keeping us busy and teaching little girls to one day take care of the kitchen. "Nonetheless, young Fatmata Binta never imagined becoming a chef. She studied and graduated in International Relations and after embarking on a career as a TV host, she moved to Madrid to teach English and explore Europe. Once in Spain, to make ends meet, she started cooking for some African friends and charities, and only at that moment, thanks to the comments of those who tasted her dishes, did she finally understand that she wanted to pursue a career in cooking. So, when she returned to Africa, she decided to attend the Kenyan Culinary Institute in Nairobi, where, after graduation, she soon started to work in hospitality. But the rigidity and monotony of the work shifts, added to the awareness that her beloved African culinary culture was not sufficiently valued and was gradually disappearing, persuaded her to change course again and to launch her unique Fulani cuisine concept. “I quit my job and I decided to devote myself to understanding more about my culture so that I could educate the world. I spent several months living and cooking among the Fulanis and documenting their recipes, and when I moved to Accra, I decided to host dinners inspired by that. That’s how Fulani Kitchen was born.”

In addition to promoting the vast and varied culture of her tribe, with Fulani Kitchen, Chef Binta intends to promote more sustainable foods and lifestyles.

“Sustainability is not a trend for me, it is second nature. When the civil war spread in Sierra Leone, my family was forced to move to Guinea, where my grandmother lived. We were 300 people and we settled in a village that could only accommodate a population half our size. In that situation our families had to find a way to feed everyone at the lowest price. We went into the woods to collect firewood to cook, we took water from streams, we planted our own vegetable garden, we cooked offal that people didn't purchase at the market and we cultivated Fonio, an ancient West African cereal which is known to be highly nutritious and high yielding, with the ability to grow in harsh conditions and be harvested in as little as 6 to 8 weeks. We were sustainable without even knowing it. This is where my particular interest in sustainability comes from”

Everything started as a personal journey for chef Binta, who spent years studying other West African ingredients such as millet, dawadawa, egusi, okra and baobab, and her connection with the environment and the Fulani culture soon became the vehicle of her success.

“When I decided to start studying and promoting the cultural history of African food, I didn't know that it would shape the way I act and see things both as a person and as a cook. I am very grateful to the Fulani people, especially the women, because they are the true keepers of Fulani traditions. Whenever I look for an ingredient or for inspiration, I visit them at the market, and each time I learn something new, such as the countless medicinal and nutritional benefits of some indigenous food. Sometimes I even meet some girls who know more than I do in terms of food and that makes me a little bit sad because they could’ve been me if they had been born in a different family or situation. That's why I thought it was essential to give them a voice and bring them along. " So, she inaugurated a foundation that helps women grow and sell fonio all over Africa, and plans for a Fulani Culinary Village are underway in Ghana, where people will have the opportunity to learn about, and be inspired by, the Fulani culture. But that is not all, because she is doing something even more revolutionary. “I am asking several Fulani women to be my business partners, because in Ghana they’re not allowed to own land. I’m finally giving them the opportunity to start their own business because I firmly believe that you don’t have to be young, graduated, or rich to make a change. You can be old, poor and without any school degree and still make a difference in the world you live in. And they really can make the difference in this world.” And when we ask her why African female chefs are so under-represented on a global scale, she candidly replies that it’s “probably because the men in the industry underestimate women and they sometimes forget that their mothers, grandmothers and sisters are the true keepers of the gastronomy. There are so many female chefs that are doing well in the gastronomical African panorama, but they don’t have enough visibility on the global stage for some reason. Probably because we, the women, don’t collaborate enough, and I really believe that if we can learn how to put all our knowledge together and put all our female egos aside, we could create something magical. We don’t need to be competition, together we can be stronger and finally let the world know how good we are.”

Floriddia: Custodians of the Past

We talked with Rosario Floriddia, owner of the homonymous legendary Tuscan farm, about ancient grains, health, sustainability and landscape.