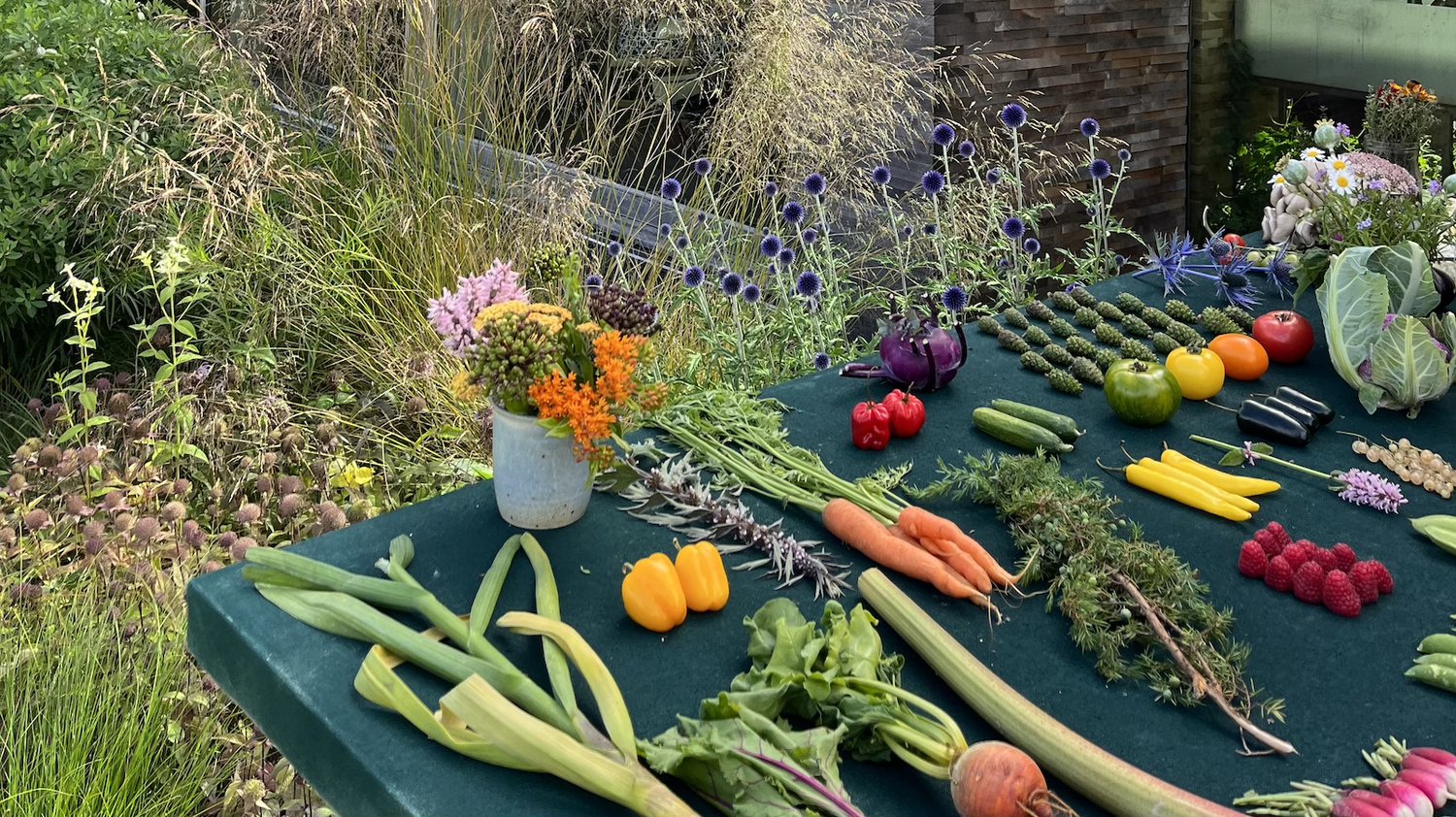 This summer, the World's Best Restaurant 2021, Noma, announced some significant changes coming next year. But before embarking on its new transformative journey, Copenhagen-based Noma will be open throughout the winter and is now serving its vegetarian season.

Earlier in July, Noma, in the presence of its R&D chief manager Mette Brink Søberg, was inaugurated into the hall of fame of the World's 50 Best: Best of the Best category. Next spring, the whole team will travel to another part of the world. «This trip will be the starting point of one of our biggest transformations so far» - states the official source. 2023 will also mark the restaurant's 20th anniversary and the beginning of a new and exciting phase, where we will see the birth of a new Noma.

This season's vegetarian menu celebrates the vegetables that bring forth a plethora of umami-rich flavours throughout the whole tasting menu. It works astonishingly well, thanks to the huge amount of lab work, research, and the team's genius curiosity. No challenge is too big to overcome for the team at Noma. Take the wonderfully crafted starter that reinvents itself each year. The nasturtium flower sits on the faultless potato crisp and announces a kaleidoscope of summer flavours and colours. Then there’s the summer salad dish that truly epitomes summertime. A celebrative plate with layers of multiple garden berries and vegetables, the broth of fermented tomato water and smoked butter with a mild acidity, aromatic leaves, flower petals, sweet and fragrant raspberries, cherries and strawberries, and barbecued broad beans.

There’s an explosion of tingling white currants in the pea and white currant transparent dumpling, then an homage to Mexico with a padrón pepper, filled with grilled baby cucumbers, strawberries, parsley, raspberries, spicy sunflower seeds, and special chile morita (a smoked version of jalapeño peppers), all served with frozen green rhubarb juice. The most ambitious and meticulous work on the texture of the SCOBY 'steak' of Jasmine kombucha mother brings to mind squid, served with an XO sauce of aromatic seeds and a paste of marigold and tomatoes. The genius meaty notes of the barbecued artichoke are reminiscent of lamb, and the most satisfying dolma is filled with a paste of pumpkin seeds wrapped in cucumber leaves. Then we move on to the deep-fried marigold flowers and the egg yolk sauce that softens their bitterness and the lion's mane mushroom steak with roses, and curious pumpkinbushi (made traditionally: simmered, smoked, and fermented) cooked with koji oil. And then, the mushroom and onion jellified broth where the plum kernel oil gives out marzipan and peach notes, perfectly paired with the tender blanched young garlic.

To discover more from behind the scenes of this year's menu, served before Noma's big change in direction, we met up with Nathaniel French who has worked at Noma for ten years and has recently moved from the kitchen to an administrative role as the restaurant’s project manager. He reflected on his time and the recent shift in Noma, and the latest vegetable season before the restaurant's next chapter…

I first came to Noma in 2012 as an intern. In 2010, I graduated from university in the US with a degree in political science. Halfway through studying, I started cooking as a summer job, and after graduating, I went full on into kitchen life, working in a small fine dining restaurant in the town I grew up in. I loved the pace and excitement of working with food. After living at home and saving up money for 2 years, I had the opportunity to stage at Noma and jumped at it. It was an incredible shift to work in such a highly regarded international kitchen, given that all I had known before was a small and talented team north of Boston. I had many different responsibilities as an intern, but all were to assist different sections in completing their daily mise en place.

All the time, I was doing my best to stay focused on immediate tasks and complete them to the best of my abilities in as little time as possible. I loved being an intern in such a fast-paced place. It opened my eyes to the potential of determination and drive. I happily paid for my flights, rented a room, and gave my time away for free to learn, work, and be driven by infectious energy. I have done many unpaid internships over the years out of my own pocket and would continue to do more if the right opportunity presented itself. In 2013 I was hired as a chef de partie, first working upstairs in a smaller kitchen managing some simple lacto fermentations, the production of flavored oils for all sections, juices, and a few other tasks. Eventually, I was moved, to work on the snacks section, which entailed the incredible challenge of organizing the first 12 small bites on the menu (at the time). Then we went to Japan, where I helped in the hot section for the main course. Two years later, I was eventually promoted to sous chef at the start of Noma Mexico.

I have spent the four years of Noma 2.0 helping the test kitchen develop dishes for new menus, helping with product procurement, and of course, helping the team in service. Since the pandemic, I've shifted my focus in the restaurant and moved into an administrative role: project manager and assistant general manager. My position now is much more dominated by specific projects—organizing international private dinners, project manager/editor of the new book, helping to redesign our website, and more. Moving from the kitchen to the office has certainly been a change of pace, but for me, it has been beneficial to gain more free time, which I am using to study economics and finance through online courses with Harvard.

Noma will forever be a creative tour de force

It's a nonstop machine that constantly seeks to reinvent itself without ego. The test kitchen failure percentage is insanely high—95 to 97%. Very few of the dishes created actually make it to the menu. However, it is those dishes that pass the test that make such an impact on diners.

With each new season comes a clean slate and a fresh perspective to ponder "what is next?". While some concepts see further iterations in future menus, generally, we strive to have completely new ideas each season—and that’s no easy task to complete three times a year. The ability to move on from a dish, whether iconic or otherwise, is vital in our creative process. To not get bogged down by what has previously had success, to try to dream about what else is possible.

Additionally, Rene understands the importance of storytelling with regard to human interaction. This is reflected in the design of each menu as we trace the year from season to season.

In the end, it is a game of numbers to meet our weekly revenue goals. We adjust and shift the days to determine which combination works best for our staff to maximize their time off and strike a better balance between work and rest.

The pandemic changed many things for the restaurant industry. For Noma, we were forced to have one seating by expanding our dining room to fit more guests. Our lounge is now an additional dining area. Likewise, our private dining room is no longer private, but a different perspective of the restaurant with the same menu.

We now serve, on average, 80-86 guests a day. If we have lunch and dinner, it is about 140 guests in total. To reiterate, our primary focus is to find the best balance for the staff, but as many people know, margins are very narrow for restaurants. Numbers need to be achieved for the sake of the business and its overheads, but the days of working 14-16 hours (or longer) in fine dining are long gone—and rightfully so.

It is intense and inspiring. People volunteer their time to be at Noma, so you must do your best to give them something in return—a new technique, a different perspective. Above all else, treat everyone you encounter with the utmost respect. That has always been my philosophy, instilled in me by my first chef, Chris Parsons, while working in Boston. Always always always, treat all colleagues with respect—even if the sentiment isn't necessarily returned. Additionally, always be humble and realise that there are many different ways to complete the same task—listen and learn from others because different cultures will provide you with perspective and a better understanding of who you are and where you come from.

The next secret pop-up

I cannot confirm or deny where the next pop-up will be, but I am definitely excited about it. The pop-ups we do are always adventures in which the team grows together. It's so unique to move to a new country and fully integrate into it—to do your weekend grocery shopping in a local market or wash at a laundromat down the street. It's one thing to visit, it's another thing to take up residency and find routine in a completely new place. I can't share any other details at the moment, but I'm happy to talk more about it in the future.

The new exciting phase is something else. I also cannot share much about that, but it will provide a tremendous opportunity for our current and future team that will be with Noma. I've been proud to be a part of this team, professionally and personally. The next exciting phase will be no different from this.

The vegetarian menu is always the most difficult to compose. How do you provide the same value to vegetables as to a fresh langoustine or beautiful piece of sika deer?

We have always thought of vegetables as incredibly luxurious ingredients, but the general public does not necessarily share the same perspective. It isn't easy, but the challenge is fun. Storytelling plays a big part in every season, but particularly the vegetable one.

The "SCOBY steak" has been an idea brewing in the mind of Dhriti, one of our senior chefs de partie, since the second covid-lockdown in Copenhagen. We spent that time diving into creativity, focused on different tasks based on overall themes. The texture was a big one, and that's where Dhriti first came up with the initial idea. It began by making a sort of translucent frozen gel that became clear with the addition of a warm broth. That expanded into a candied SCOBY—a traditional sweet snack in the Philippines—in a dessert in the Game and Forest season in 2021. Further exploration and testing led it to the current menu in its "steak" form. Who knows where it will go next….