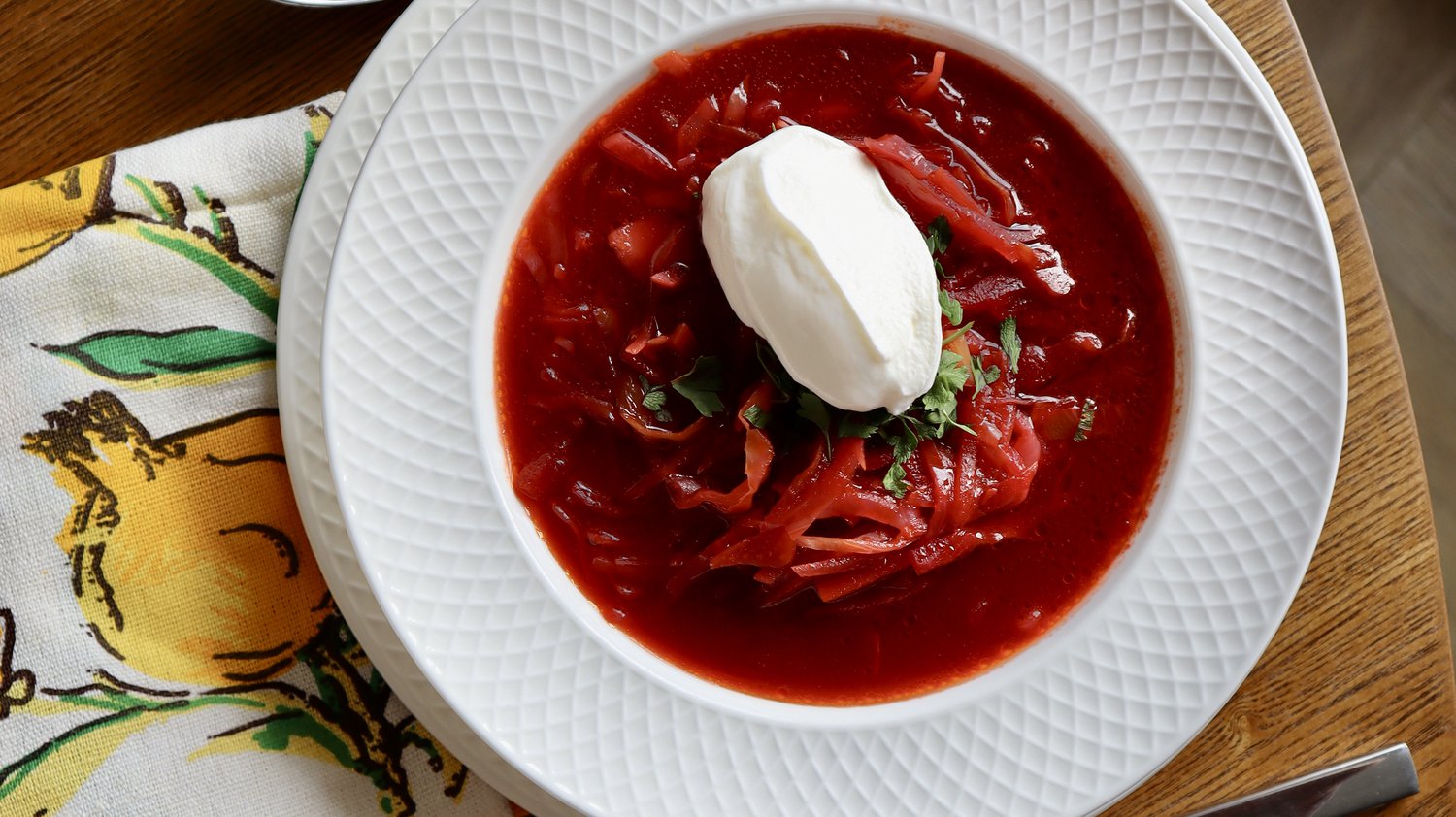 "One day when we were under fire, I realised that fear was taking over my thoughts and my life. I was constantly worrying about would happen to us, if the rocket hit my home, if I had to be quick and run, if I would even be able to stay alive. Even when not under fire, there’s the constant news about the war. I felt as if my life had faded away and all that was left was fear. I needed to find a way out and this way out was through my food.”

This is the story of Igor Mezencev, a chef from Kharkiv, member of the Slow Food Chefs Alliance, and the creator of «TOPOT», already a well-known project that immerses young chefs into the wild to test their survival abilities and creativity in the extreme environment, but most of all, lets them discover the abundance of the Ukrainian landscape with all its wild plants and the small-scale farmers working in areas such as the Carpathian Mountains and Black Sea Estuaries.

While viewing the horrific footage of the destroyed farms such as «Agromol» farm in the Kharkiv Region, where hundreds of cows died, Igor tried to think of ways to help and he came up with some interesting ideas.

His recent initiative called «The Victory Menu» is a collaborative project, joining forces with Marina Bulatskaya from «Lavka Tradiciy» (which unites farmers and craft producers, in the retail space of Silpo stores) and Ukrainian food ideologist and journalist Aurora Ogorodnyk.

The main goals are to raise money to help farmers, particularly those who have suffered during the war, by using the recipes of Ukrainian chefs. The mechanics is simple: a chef or a restaurant that wants to help should download the given list of recipes, add those dishes to their menu and transfer the percentage of sales to support the farmers, afterwards they will receive a report on donated money.

These recipes will be shared with chefs from around the world who can then put them on their own menus, raising awareness of traditional Ukrainian cuisine and saving the patrimony of these important dishes. Additionally, all the profit from the sale of these dishes will go to the «farmers fund»  to help farmers with their targeted expenses (such as restoring buildings and medical treatment for their animals).

We talked to Mr. Mezencev about his recent project and the current situation in his country.

Where are you now?

Now I am in Kharkiv. It is in the East of Ukraine, bordering on Russia. Our city and this area have been under fire from the first days of war and this has continued ever since. It is now 22:00, curfew and the daily blackout started two hours ago.

Are you alone these days?

I've been alone for nearly two weeks, apart from of course my faithful dog who is always with me. Today the parents of my girlfriend visited and they were finally able to talk to their daughter via a video call. They have been unable to contact her from their own home, as where they live they have been without power since the beginning of the war as in the first days a rocket hit the power plant responsible for their area. I must say, last night was particularly terrible. Some shells hit which created some strange green flashes.

You have mentioned that your girlfriend left Ukraine. How often are you in touch?

Yes my girlfriend left and is now in Spain which I am very glad of. Yes we’re frequently in touch. We speak when she’s home and now she’s not afraid when we speak, the loud explosions were so terrifying for her here. I can see it’s become easier for her there, even her countenance has changed. I am very glad of this.

Have you ever thought about leaving Kharkiv?

I have been in Kharkiv from the moment of invasion, and this question has been asked of me by all, from acquaintances to people from around the world. My answer to this question is that I have chosen to remain in my house, and I will protect it as much as I am able. But also I have family here, my brother’s family, and the family of my girl Ania. Moreover I have my ill dog here who has heart failure, and it would be impossible for my dog to undertake the journey to escape.

How have you been able to deal with the pressure?

Honestly, my girlfriend Ania helped to teach me how to deal with it. In the early days the stress just broke a part of me, I tried to control it, but when you hide and bury the stress, it can cause you physical pain. I’d get pain in my neck, and sometimes my kidneys hurt badly. In the third week Ania got sick because of back pain, though thankfully she was not so sick that she didn’t make it out of Ukraine. I learnt that you have to release your stress, and so now I cook food, and through this, I can get rid of my stress for a time. Some days I feel as if I’m coping, but it’s hard to really know. What is happening was most definitely not in my plans. Perhaps there are moments when I don’t cope so well, but I cope as best I can, I get through each day, one day at a time, and that’s all thanks to the fact that every day there is a program, a daily routine.

How is the situation with the food supplies?

In the first three to four weeks it was very difficult to find products, at first there were queues for many things, and people were taking away as much as they could. I had some food saved up and this helped. The prices doubled while the range of products was limited. Now the situation seems better, there are a lot of volunteers and humanitarian aid comes, the whole world has helped.

Do you have family in other parts of Ukraine?

Now in Ukraine it is martial law, and only women and children can leave the country. The men must remain here to protect the homeland. My friends left on the western part of Ukraine, it was safer, but already many have come back home, and begun to work.

Did you have a specific moment where you really feared for your life?

Yes, there was one moment or maybe even several, the first was when we had to go to the store and that street was fired upon with rockets, and people were killed there. And the second time I heard a rocket fly above me, I raised my head looking behind the house in front of me, and it exploded and everything started to burn. There was a huge column of smoke, but I did not run home, I just continued on my way. But my stories are probably funny compared to what other people have been through, whose houses are fired upon and they just collapse like a house of cards. I would like to wish them strength.

How is life in Kharkiv right now?

Well, Kharkiv was heavily bombed, the city center and residential areas, but thanks to the measures taken, it is clear now, thanks to the Ukrainian troops, the enemy did not manage to get too far, although I saw several enemy cars from the window, but they were cleared and the city was guarded. Kharkiv residents are strong, every day they put the city in order again, they save animals from the zoo. It’s the best city on earth with the best residents. 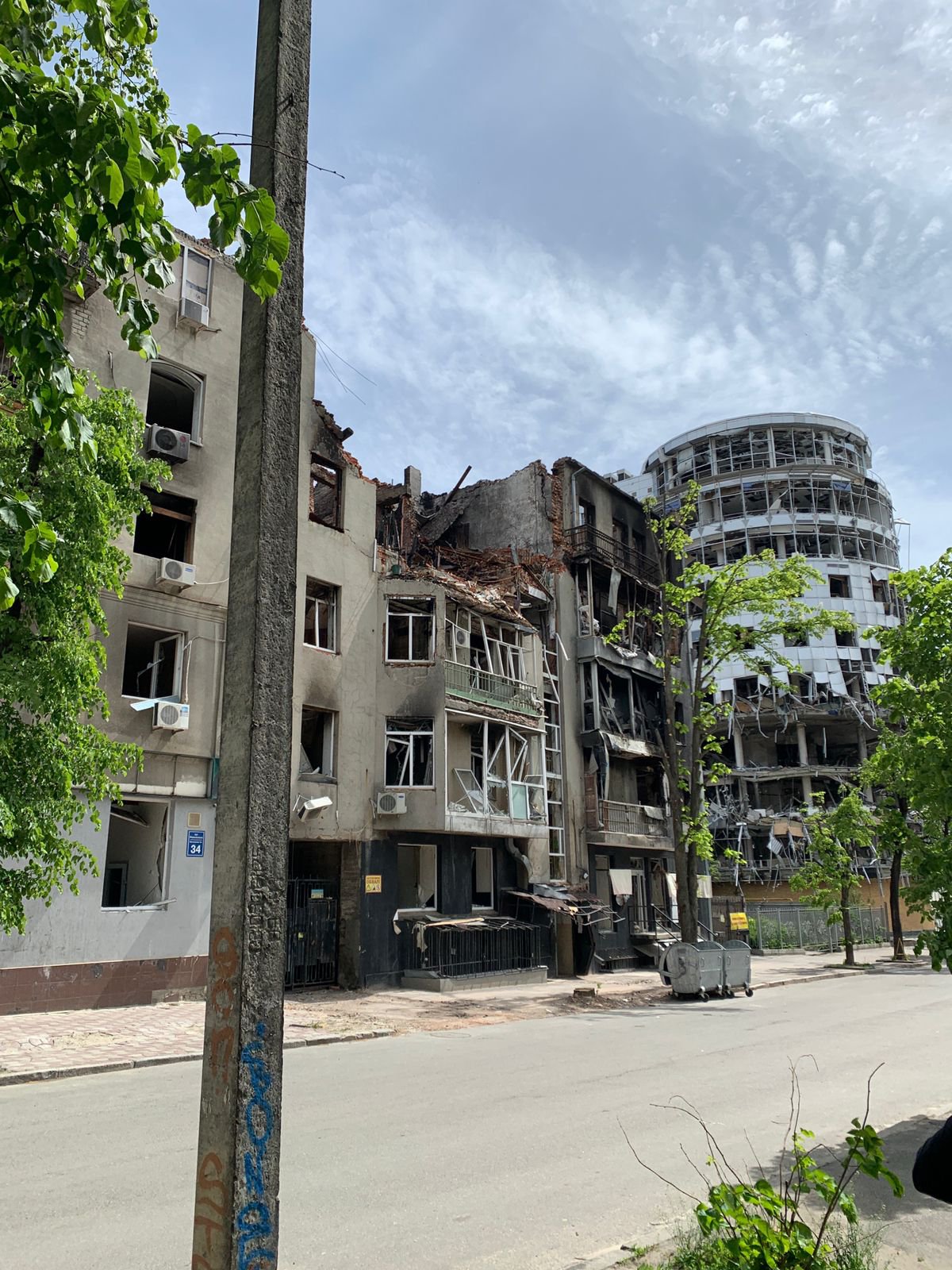 The recipes you shared in the Victory Menu project: why are they special to you?

It is very important to me to share them. They are a part of my family history, cooked by my parents and grandparents. And there was my mission, I wanted all the chefs who were offering to help, to prepare my dishes, and dishes of other Ukrainian chefs which I  collected. This would mean a great support for Ukrainian cooks and farmers. The recipes feature sausages from my grandma, borsht on smoked pears that we used to make with my brother and a dessert from my mother. I’m thinking of remaking these recipes in a fine dining way in the future. 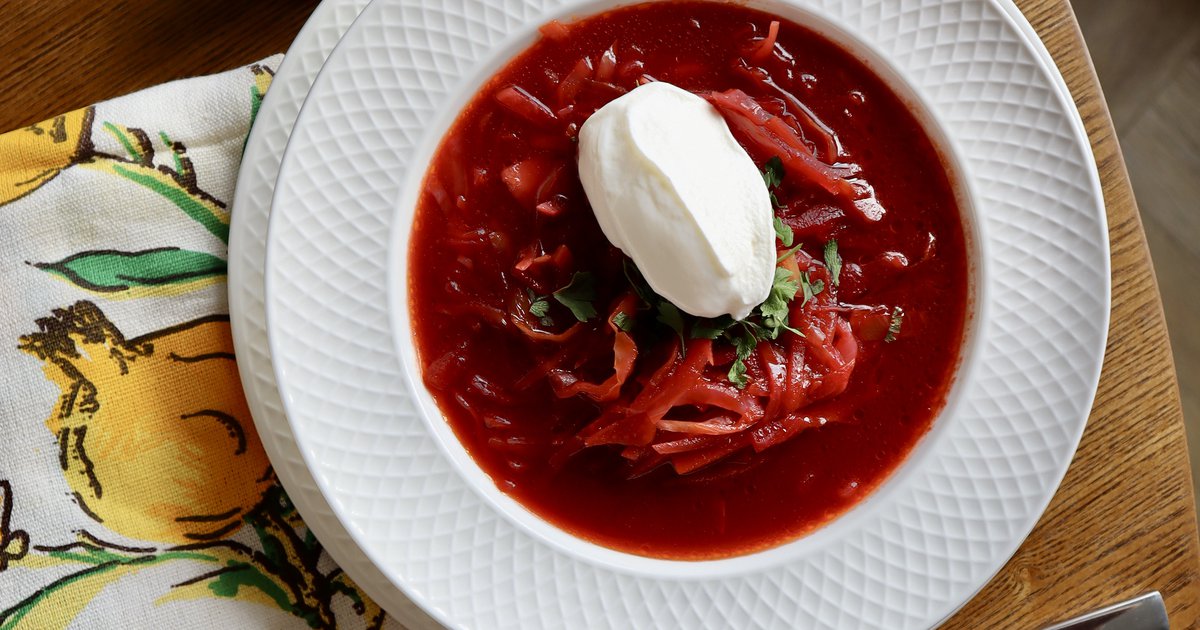 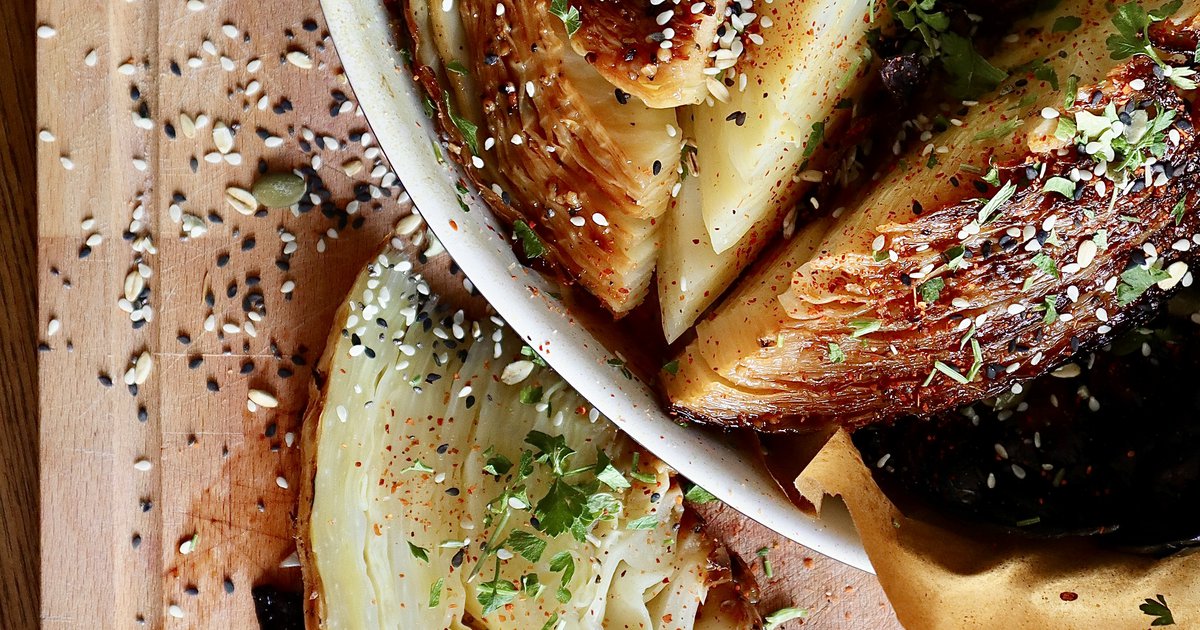 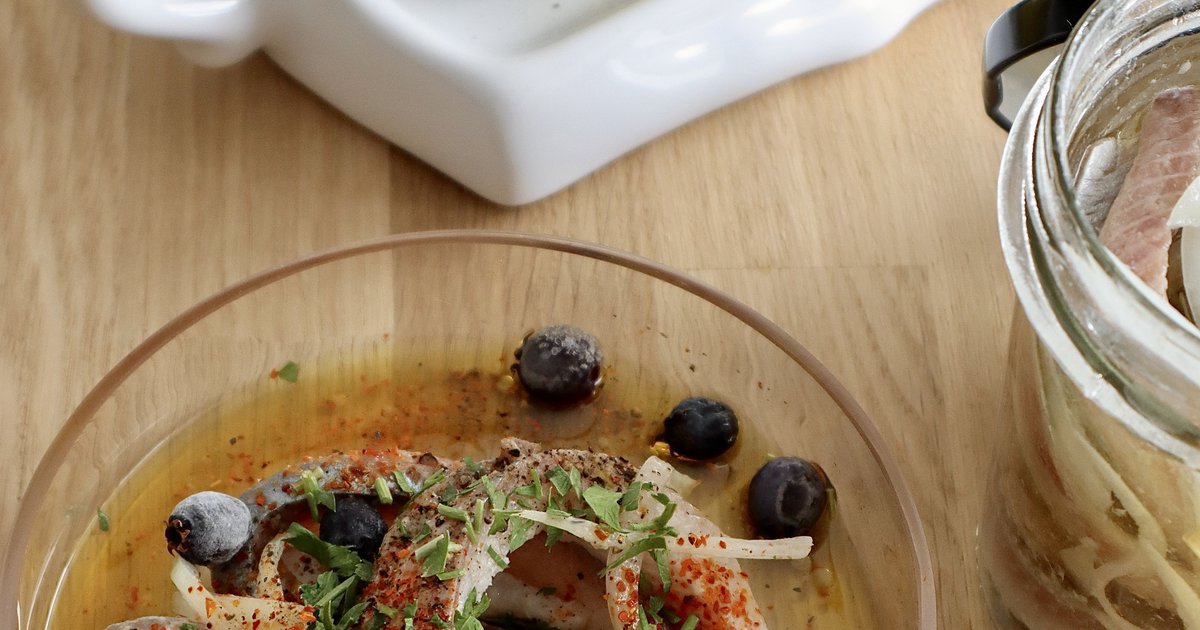 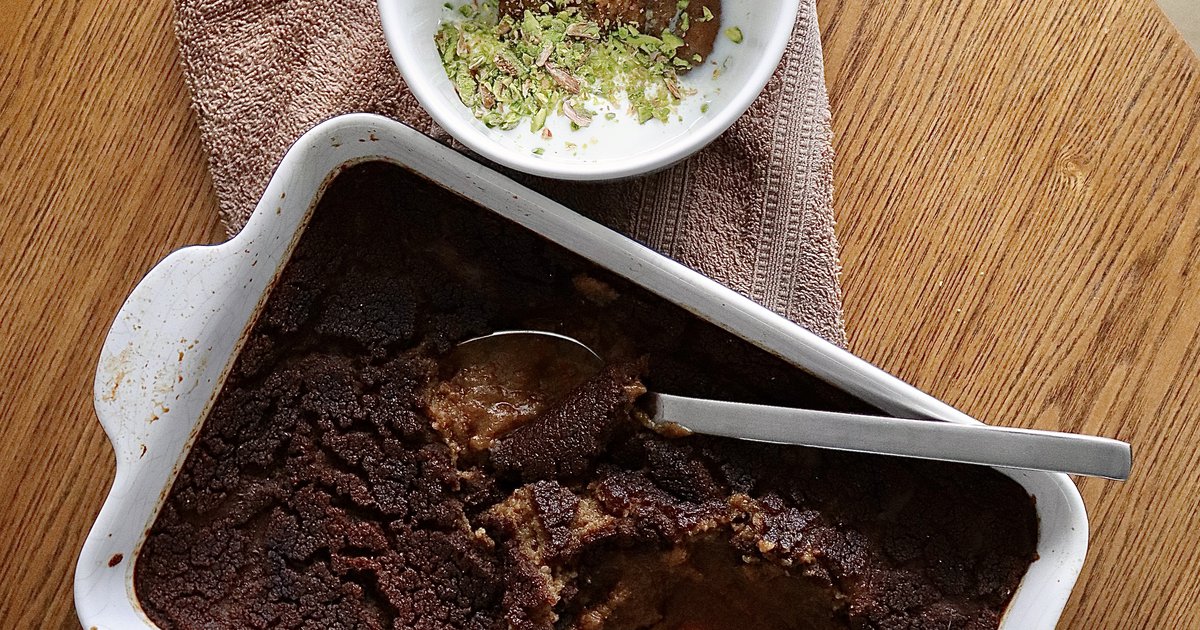 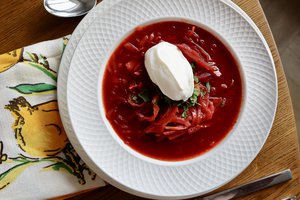 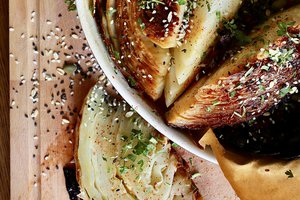 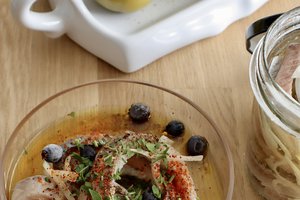 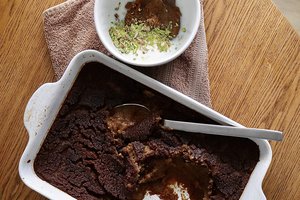 What do you imagine is going to happen in the near future?

Last year myself and other activists were trying to do our utmost to invite to Ukraine the international press, foodies and people from the industry to show how the country is developing and how much potential it has to go further. It seems now that time has stopped for us and we’ve missed the things happening on the world’s gastronomic scene, but at the same time we have been given extra attention which is a positive moment for our culture. People have more information and there’s more concentration on the authentic Ukrainian food and its meaning. I feel sorry for the young chefs, for most of them now it’s difficult to get their thoughts together, to develop their craft.

Topot: Surviving in the wild to write a new chapter of modern Ukrainian gastronomy

How Topot is shaping a new generation of young Ukrainian chefs.