When it comes to a healthy food future, youth is the key asset.

Showcasing the role of young people’s voices in transforming the future during the second edition of the World Food Forum. 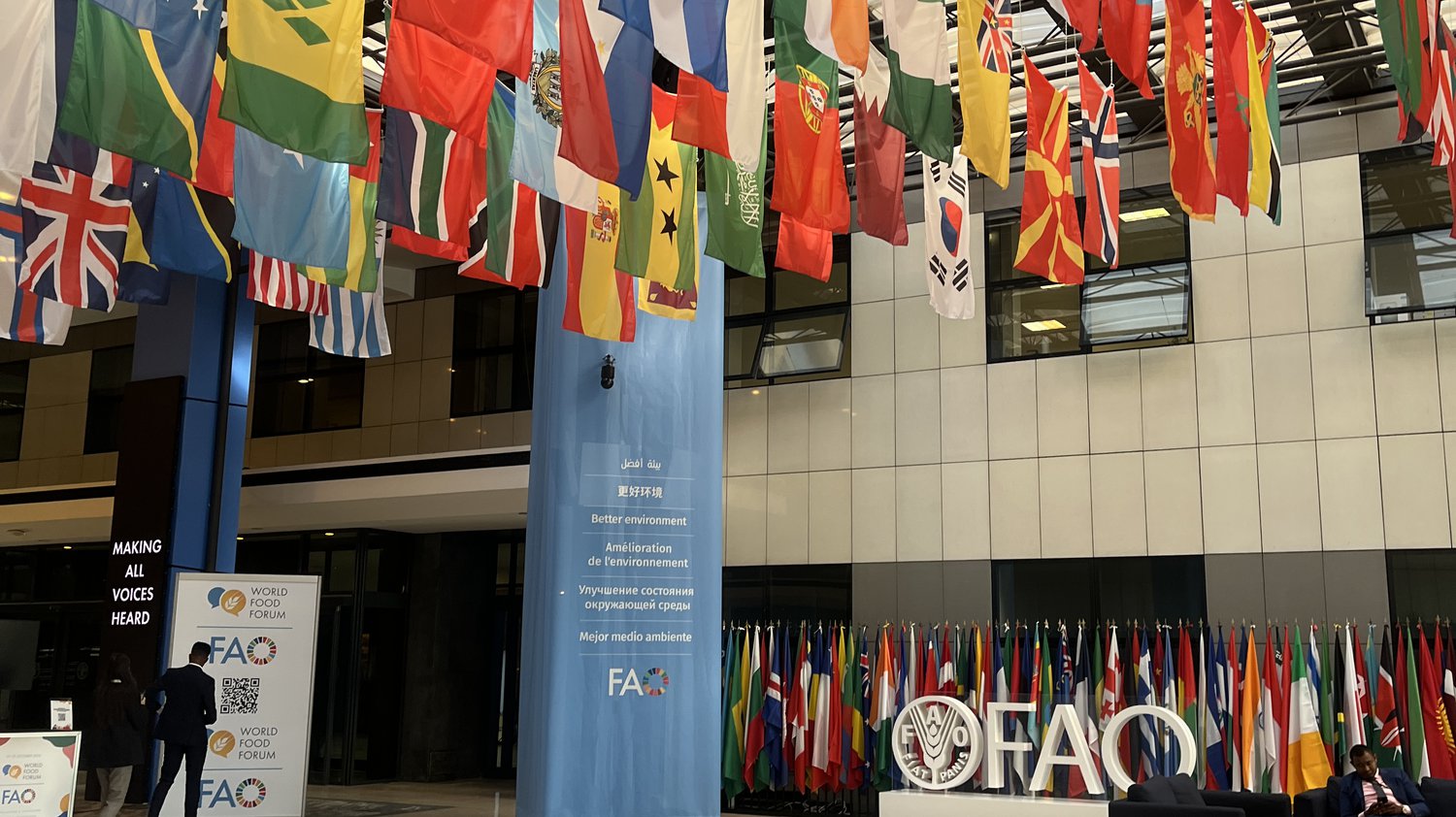 “You have created a global movement with us. You are making your voices heard, and they are dynamic. You are inciting and leading real action,” FAO Director-General QU Dongyu addressed young people at the opening ceremony during the WFF.

The future is a warning, as we step into the years of unprecedented hunger, as stated by the UN statistic, with ongoing conflicts, the effects of the COVID-19 pandemic, the climate crisis, and the rising costs of living. As stated in the FAO Food Price Index, food costs reached an all-time high in February 2022, just one more factor that is contributing to the 3828 million hungry people across the world.

And this is all happening just eight years away from 2030, and the challenge to reach the Sustainable Development Goals (SDG) targets. Therefore it is vital that there are new solutions found within production industries, and consumption patterns improved, to reduce the costs associated with unhealthy diets and climate change by the 2030 deadline.

The 2021 UN Food Systems Summit pointed out the failure of the agrifood systems to deliver on the SDG, with these systems being responsible for 31 percent of anthropogenic greenhouse gas emissions.

Showcasing the direct link between climate change and our access to safe and nutritious food and healthy diets, the World Food Forum (WFF) has brought forth its second edition with the theme “Healthy Diets. Healthy Planet.”

As it was stated during the forum, “solutions that recognise the linkages among food, agriculture, biodiversity, and climate change can contribute to food security and enable healthy diets for all, ensuring that no one is left behind.”

Conceived by the FAO Youth Committee, the WFF gathered young voices aiming to spark ideas and solutions to help transform agri-food systems and achieve the SDGs such as SDG 2 ("No hunger"), SDG 1 (“No poverty”) and SDG 10 (“lower inequality”).

The uniqueness of the forum is its multifaceted and complex agenda that comprises voices from a spectrum of nationalities and backgrounds.

More than 2,000 people attended in person at the FAO headquarters in Rome, along with tens of thousands joining in virtually. Global leaders, renowned scientists and young innovators; activists, bloggers, artists, performers, chefs, young farmers, and investors, all connected and needing to be heard; within the workshops, roundtables, debates, exhibitions, and cultural activities. Giving a voice to all, the forum hosted Rome-based Japanese chef Kotaro Noda who discussed the importance of sustainable value chains and quality products in his restaurants. Indigenous female chefs, such as chef Mokgadhi Itsweng, from the Balobedu tribe in South Africa, and a team of Sámi chefs put on cookery displays using their native ingredients and cooking techniques and there were performances from Grammy Award-winning musicians Ricky Kej and Lonnie Park, and Italian street artist Cibo among others.

The high point of the event was marked by the participation of the highest caliber global leaders. President Xiomara Castro of Honduras called for the forum to come up with holistic solutions for eradicating hunger in the short and medium term; President Andrzej Duda of Poland paid tribute to young people’s commitment to the transformation of food systems to make them more responsive to humanity’s needs, and President Carlos Manuel Vila Nova of Sao Tome and Patrizio Bianchi, Minister of Public Education of Italy, highlighted the solidarity in working for a better future and providing decent, healthy food for all, reducing the impact, as “the health of the planet is the heart of humanity”.

The Global Youth Forum is one of three specific directions that were taken over five days at the FAO headquarters, together with the Science and Innovation Forum and the Hand-in-Hand Investment Forum. The Global Youth Forum featured a Youth Assembly, an innovation lab for young entrepreneurs and scientists, a food education symposium, and several other outreach activities.

During the WFF Global Youth Forum, young voice outlined their priorities to ensure greater access to safe and nutritious food, and asked decision-makers to work with them to implement effective policies.

The WFF Startup Innovation Awards is a global startup competition established to support and showcase innovators and entrepreneurs who are harnessing the power of technology to drive the sustainable transformation of agrifood systems in support of ending global hunger and achieving the SDG. The committee of agrifood systems specialists from around the globe chose the innovators and entrepreneurs who have driven sustainable transformation and supported the ending of global hunger and the achievement of SDG to be the worthy winners of the WFF Startup Innovation Awards.

The round table dialogues with young farmers, artists who share the same values, young media professionals, and indigenous youth have all contributed to advocating for how to better influence food production, delivery, and consumption.

The Young Media Roundtable within the Global Youth Forum engaged young professionals and senior experts in the media to share their experiences and success stories regarding the role of media in advocating for nature, promoting sustainable agrifood systems, and leading the charge for global change.

Another highly fruitful discussion featured Maria Rosaria Sanna, CMO and Impact Manager at Tuorlo Media, who highlighted the power and importance of positive communication, while talking about global challenges and how to address them with the most impact.

From Patricia R. Sfeir, the Leader of the Forest Communicators Network for the Mediterranean and Near East, we heard the success stories and thoughts on highlighting the importance of communication, in changing public perceptions and raising awareness on the important forestry issues outside of the recreation sector. The conversation also featured Nawsheen Hosenally, founder of Agribusiness TV, and Antonia Benito, journalist and member of the Latin American Indigenous Youth Network.

The forum also had a cultural side, as we enjoyed the second annual World Food Forum International Film Festival. Before the exciting announcement of the winners, a brief discussion took place between Lea Bruckner, professional violinist and climate activist, and Maria Sanna, CMO and Impact Manager at Tuorlo Media.

Moderated by Lindsey Hook, Head of Culture at WFF, the discussion focused on how artists can be involved in spreading a positive message, and the power of documentaries in delivering the right message to the audience.

The festival handed out several well-deserved awards including Best Fiction Movie to Ali Amirsayyafi for his film The Aghast and Best Documentary for Eskwad directed by Keziah Jean. The winner for Best Focus on Healthy Diets, Healthy Planet was Backyard Food directed by Luisa Macedo.

This year, a delegation of more than fifty indigenous peoples’ leaders, chefs, and artists from the seven socio-cultural regions of the world participated in the global discussions for the future of food, youth action, science and innovation, and investment. The BOAŠŠU Food Lab, a nomadic tent and mobile kitchen built in front of the FAO headquarters hosted several different activities led by indigenous peoples. A unique space where gatherings around an open fire and spiritual rituals took place. The activities that took place included the exchange of traditional knowledge, highlighting the importance of preserving this knowledge for future generations, and the strong bond between culture and food, praising the culinary traditions of Mexico, the Sami people, and Africa among others. 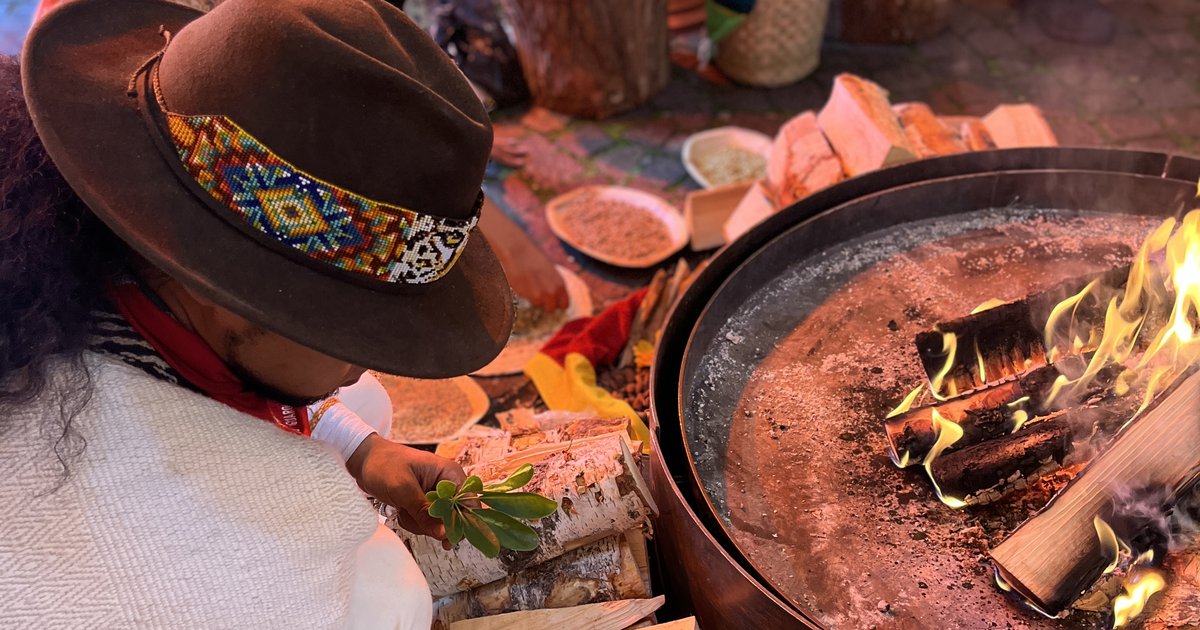 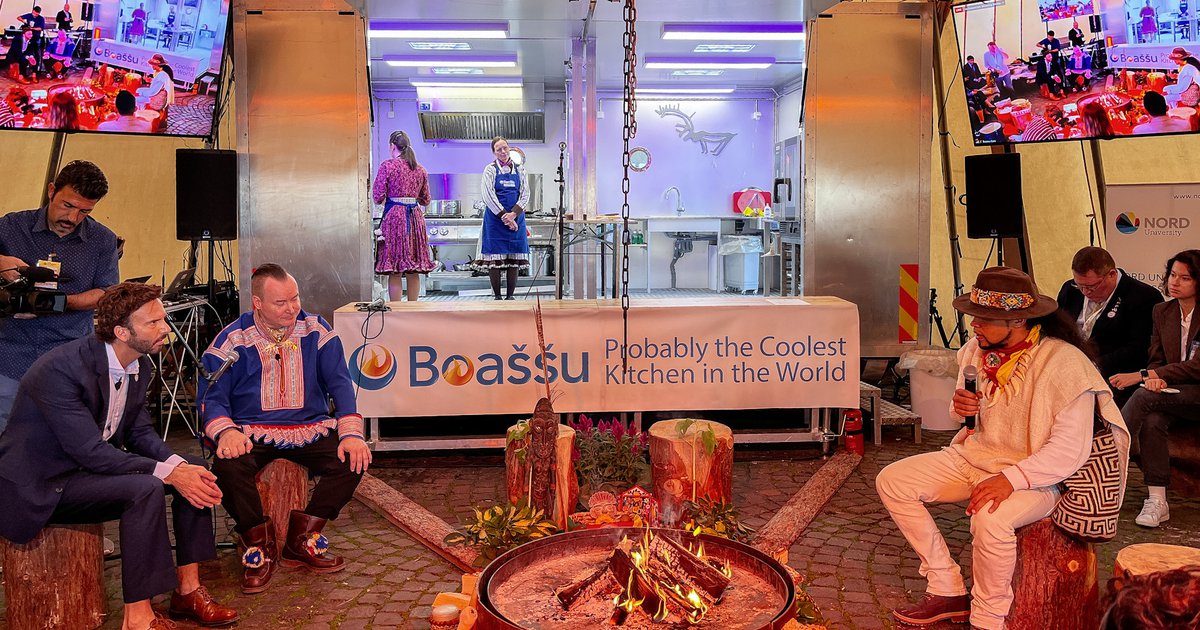 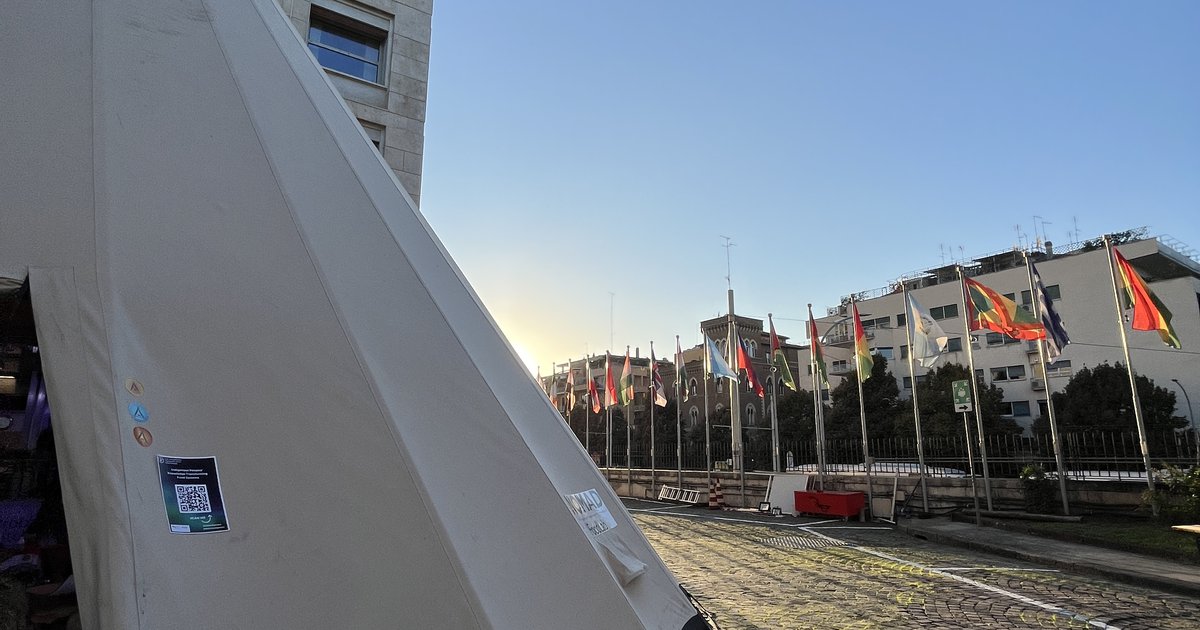 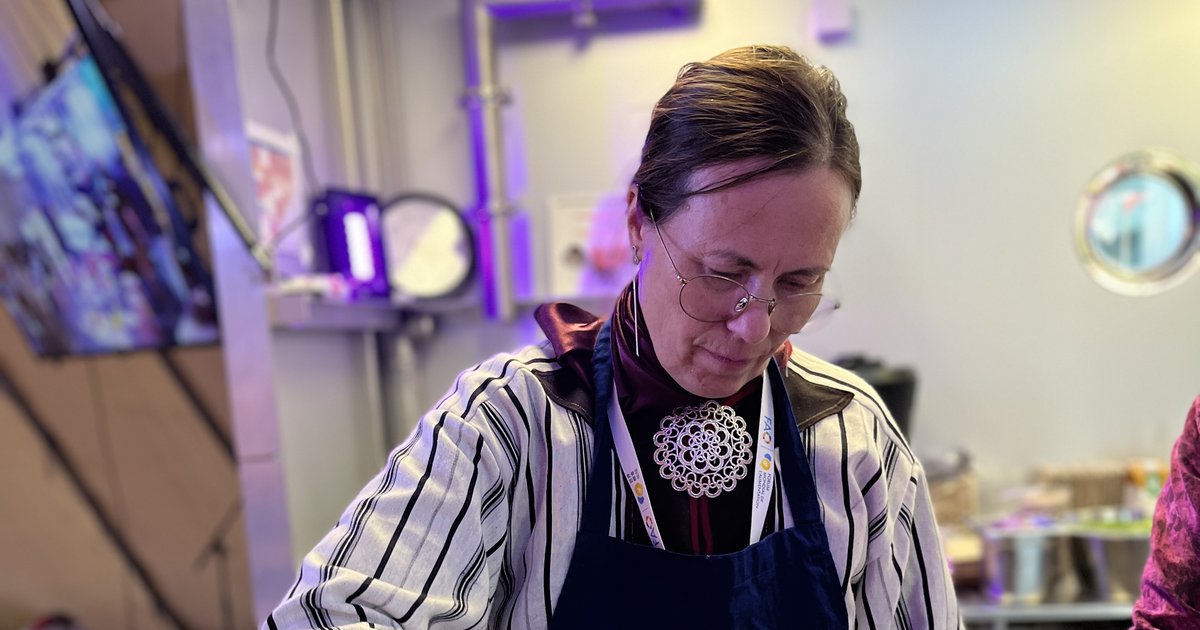 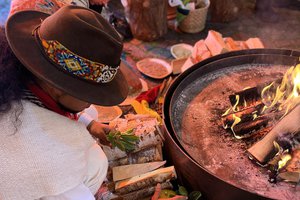 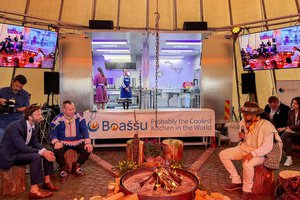 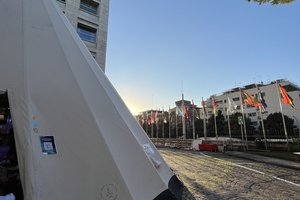 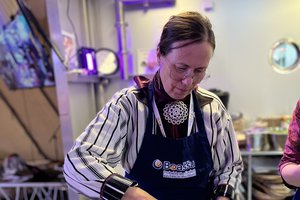 One of the highlights of the forum was the launch of the Coalition on Indigenous Peoples' Food Systems. The event involved more than 200 indigenous leaders from seven socio-economic regions, joining together in person and online. As stated by the FAO, indigenous peoples manage 25% of the earth’s surface, preserving 80% of the remaining biodiversity, while at the same time being among the most marginalised and disadvantaged populations. And so we see the importance of creating such an event. Gathering around the open spiritual fire set up at the OAŠŠU Food Lab tent, the first words were given by Silje Karine Muotka, president of the Sámi Parliament, who quoted a Sami poet, reciting "the land is different when you have lived there, wandered, sweated, frozen, seen the sun appear, disappear, return. The land is different when you know, here are the roots, ancestors." The coalition will provide a free space for these people to express their voices and advocate for a transformation in the food systems, including the sharing of models and knowledge of food production practices, focusing on the aim to protect the knowledge of the indigenous peoples' food systems and increase the knowledge of those systems. Discovering how we can learn and transmit this knowledge into the current systems so all will be in harmony. To help transform the way we eat, process, and produce food. And finally, how we can reduce the generational gap, with younger generations at the helm of the indigenous food systems of the future.