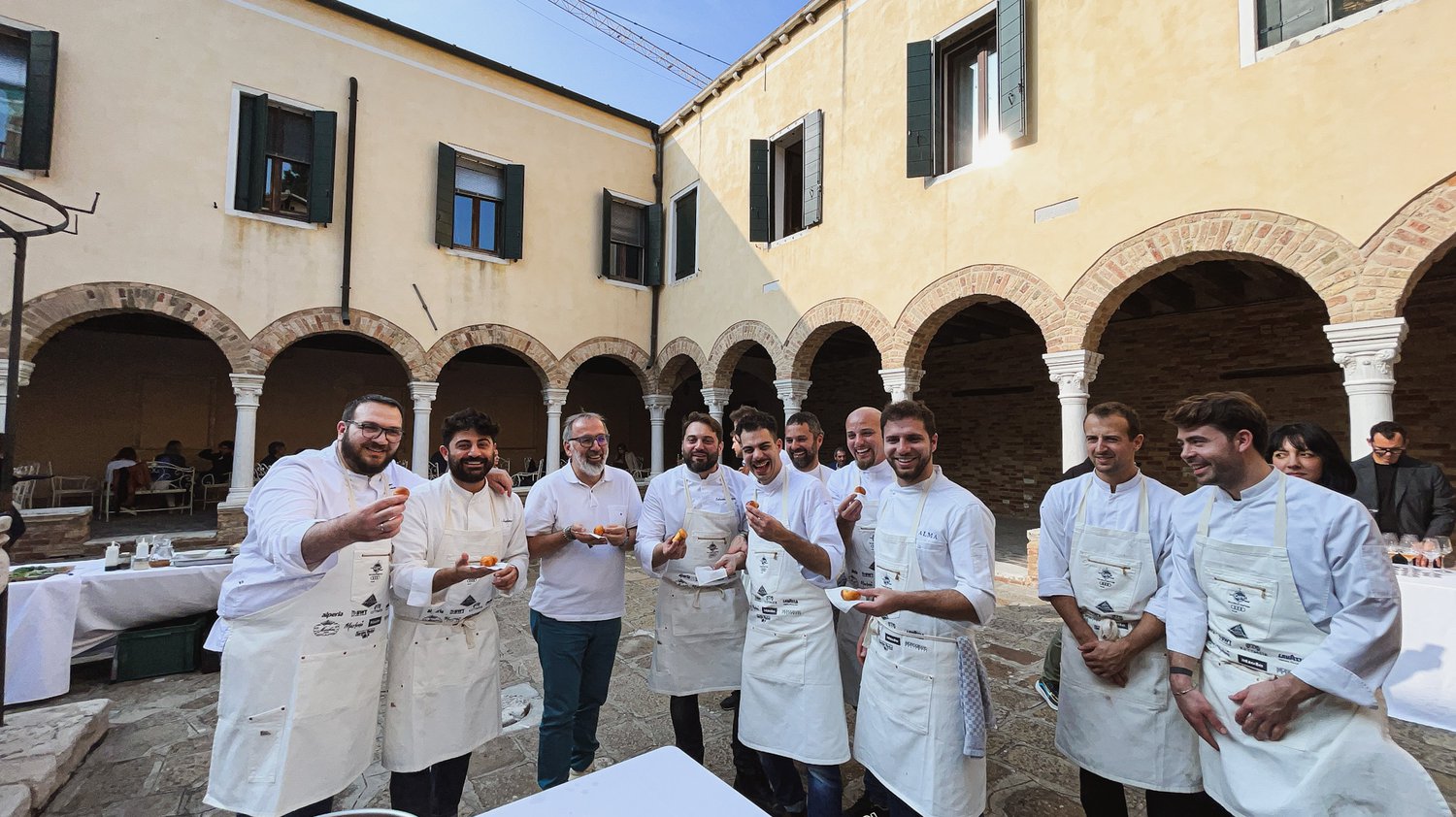 As announced earlier this year, CARE's -The ethical Chef Days, delivers triple the excitement, embarking on a journey through Italy, visiting three incredible destinations, each advocating for its own sustainable agenda, united by the idea of promoting ethical cuisine.

The event brings together like-minded culinary talent from across the globe, wine and food professionals with a special purpose: ‘to take care of the environment, the local communities and the rhythm of nature, promoting an ethical and sustainable approach to cooking’.

The enchanting Lagoon City of Venice, the city that aspires to become the 'World Capital of Sustainable Development’ pioneers the eighth edition of CARE’s.

The creation of the Venice Capital of Sustainability foundation, established earlier this year, marked a new vision for the future development of Lagoon City, one of several projects paying special attention to the transition and production of renewable energies.

Logically enough, the topic of energy was the main theme chosen for the CARE’s Talk. This involved industry professionals being asked to reflect on the need to rethink energy usage, focusing on efficiency, savings, and recycling, as well as renewable energy sources and hydrogen.

The chosen meeting point, Certosa Island, often called Lagoon's first urban park, is one of the largest islands in the Venetian Lagoon, holding a particular naturalistic and historical value in the Northern Lagoon.

Venice Hydrogen Hub, a project presented by Federico Giudiceandrea during The Talk, focused on the sustainable and self-sufficient energy microcosm on the island of Certosa, promoting, accelerating, and disseminating green hydrogen technology for mobility, and bringing it into contact with other renewable energies.

Elaborating on the topic of energy, one of the questions that arose, was “From an energy point of view, what systems must be adopted to be sustainable?”

Paolo Ferretti, the co-founder of CARE’s responded: “There is an ongoing project to make the island totally sustainable from an energy point of view. We will mainly talk about hydrogen, an element that we hear very little about and don't know much about, which, however, makes storage possible, which is a big problem at this time, when energy is produced and used but not stored”.

Within this agenda, Fabrizio Longo, Brand Director of the long-serving CARE’s partner, Audi, explained the company's commitment to promoting the transition from individual mobility to social responsibility.

Stefan Verhoeven, Global Manager of Miele Netherlands and Global Head of Sustainability, started his talk by reminding the audience of the date of the Earth Overshoot Day (EOD), the day of the year on which humanity’s demand on nature exceeds the earth’s annual biological capacity to regenerate. In 2022, globally, we had already consumed the available resources by July 28th. For Italy, EOD fell on May 15th this year. This means the country didn’t even get halfway through the year before exceeding the regeneration limit. But our ongoing debt to the natural resources of the planet began a long time ago.

"We feel a responsibility to be part of the change. We don't know if we will be successful, but we want to make sure we do our part" says Stefan Verhoeven. "We want the impact of our appliances to be as small as possible, or better yet, negative."

The culinary agenda of Lagoon City showcased ethical approaches to cooking. Launching this edition, the famed couple, chefs Chiara Pavan and Francesco Brutto from Mazzorbo Island, supporters of the lagoon’s sustainability, demonstrated what it means to cook ethically. Known for their radically local cuisine, in their Venissa restaurant you’ll taste unique lagoon produce such as seafood, and salt-water plants from their lagoon garden that is surrounded by a two-hectare vineyard.

For the inaugural dinner, the duo presented a menu that encapsulates their work, having ethical cuisine in its essence. The menu was half vegetable-based and half focused on invasive species. Blue crab, the bluefish (Pomatomus saltatrix), veined rapana whelk, scyphozoan medusae, and sea walnut, were among the protagonists thoughtfully infused into the menu. This shows how cuisine can play a part in reducing impact, contributing to rebalancing the ecosystems, and at the same time, reminding us how the consumption of vegetables has a much smaller carbon and water footprint than consuming meat and animal products.

The next day we moved on to the oldest urban vineyard, San Francesco della Vigna, to explore the cuisine of four young and prominent chefs, all united by the goal of pursuing the ethical rules of nature in their cooking. 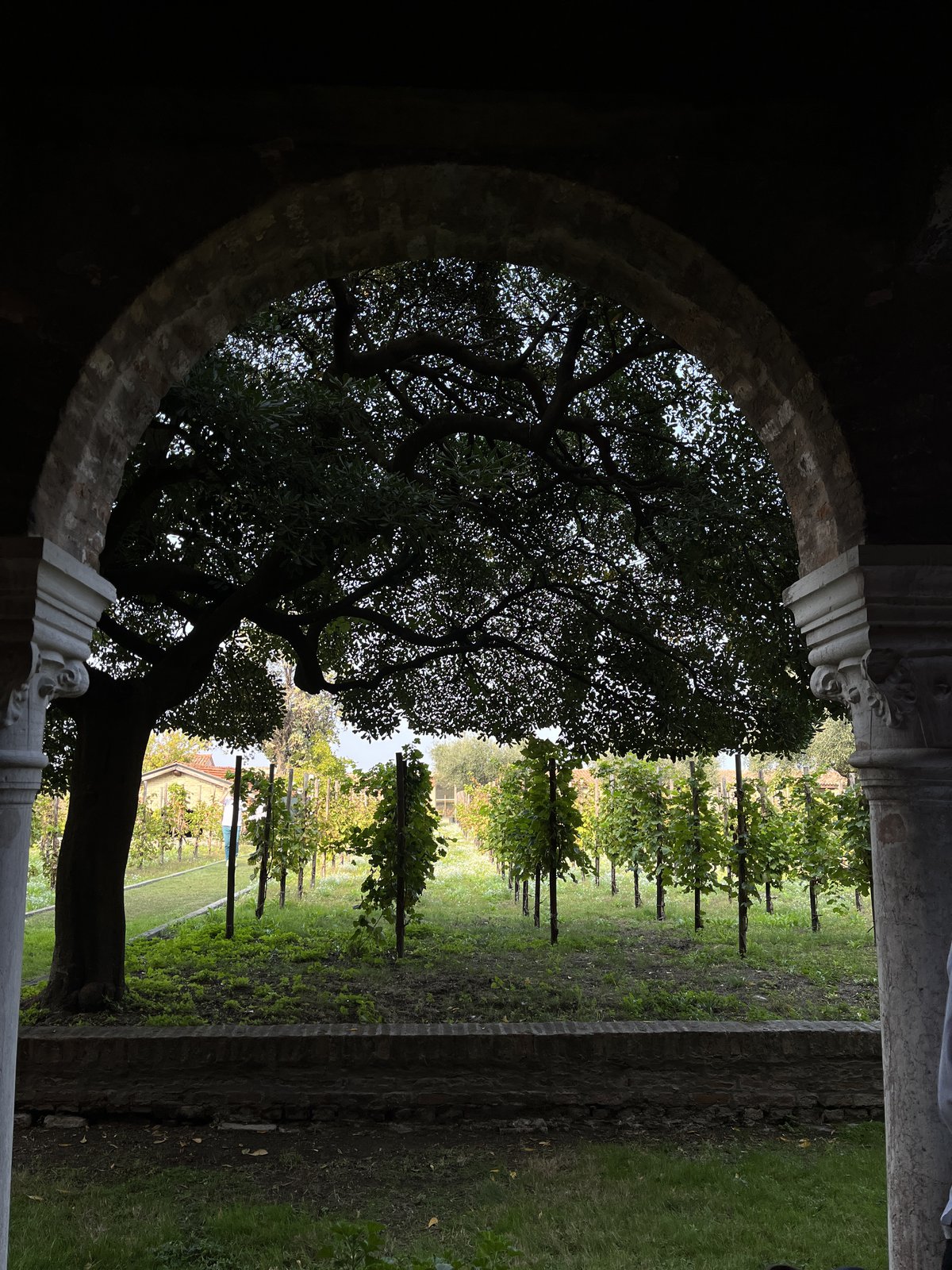 Chef Salvatore Sodano, originally from Amalfi coast, wowed with his signature, a spectacular umami-rich dish Risone di Go. A recipe that dates back to the 1600s and the fishing communities of Burano, made with local goby fish, a fish not from the sea, but unique to the lagoon. In the past, the amount of goby caught was so vast that the fisherman couldn’t sell it all. The fish is not easy to cook due to its excessive number of bones, making it more suited to broths. Risone di Go is cooked with a goby broth base, enriched with pilpil sauce and sardine garum.

Sodano, as a cook from the south, wanted to put his own personality into the Venetian recipe, and did so by utilising a special Gragnano pasta, reminiscent of rice, that gives a wonderful al dente texture, alongside a nod to the chef’s heritage.

Agostino Iacobucci, the head chef of Bologna's restaurant I Portici, as well as presenting his own version of the classic dessert Babà with Rum, was more than charismatic in front of the gathered guests, enthusiastically squeezing moist rum babas, and feeding his fellow chefs.

Rome native and pastry chef of Le Clarence, Aurora Storari, switched to pastry after five years of working professionally as a chef. From her debut experience in the kitchen at Mirazur as a trainee, she has been gradually climbing up, choosing unconventional chefs with strong identities to work with. Having spent time at the now-closed Chambre Séparée in Belgium with chef Kobe Desramaults, she remembers it as an enlightening experience. Now she chooses Paris and Le Clarence, a place with another strong personality and an unconventional approach to classic French cuisine, where she feels completely free to express her culinary aspirations.

When talking about ethics in the kitchen, for Storari it goes beyond the local products and suppliers, which now are a must and not simply part of the promotional storytelling. It even goes above the kitchen and the cooking itself, since the raw ethics of the chef lie in the human approach. Being a role model and proper leader, educating others to be openminded and ethical, and also with the product, being coherent in the context, understanding it, being flexible and coherent over time, and putting people first.

The highlight of the evening was the Social Responsibility Award sponsored by Marchesi 182 and presented by Lorenzo Bertelli of the Prada Group, prize focused on highlighting ethical and social commitment.

The winner of this year’s award was Hamed Mohamad Karim, owner of the Orient Experience restaurant in Venice. Karim arrived in Italy in 2007 after fleeing from threats in his home country of Afghanistan. He soon made Venice his new home. Fast forward ten years of living in Italy and he is now the owner of three restaurants in the centre of the city, with a goal to defeat prejudice with culinary art.

This is certainly in tune with what chef Virgilio Martinez had to say regarding the ethical thread in gastronomy, where for him, being an ethical chef means “pursuing the truth, finding meaningful things and things with a purpose”.

Norbert Niederkoffler too spoke on the subject: “Being an ethical chef first of all is about noticing the positive changes one can make oneself, at home, in the workplace. It’s a broad subject, and that should always include the ethical improvement of working with the suppliers, and above all, a consideration for what you leave for the next generations. We as chefs are trying to find ethical methods to be the legacy we leave after us.” 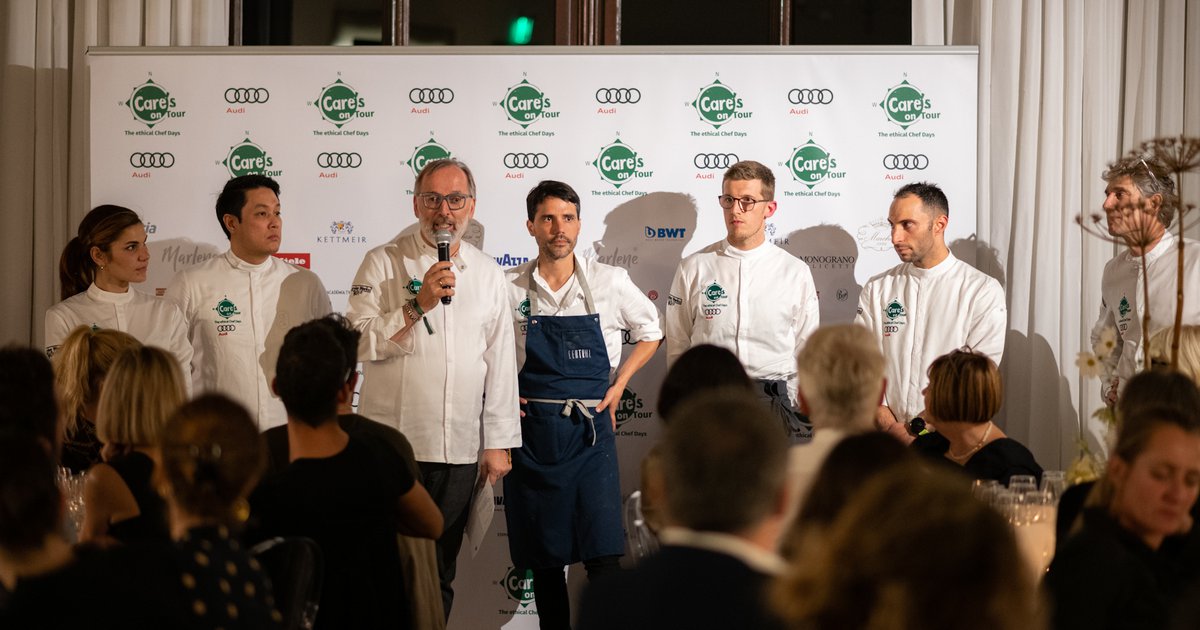 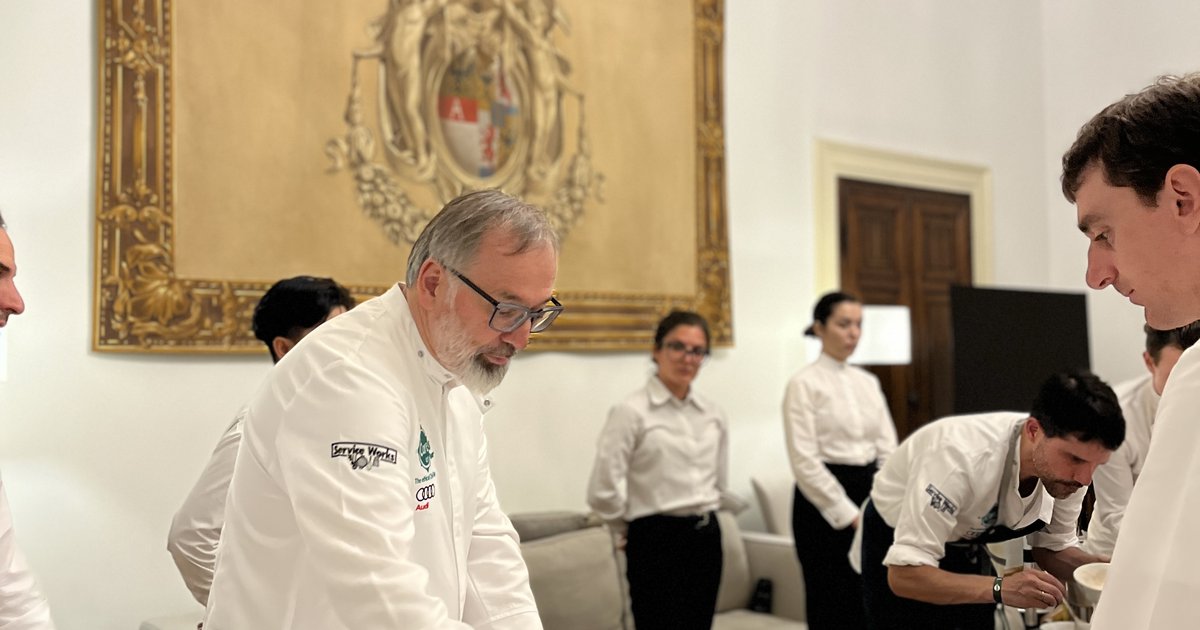 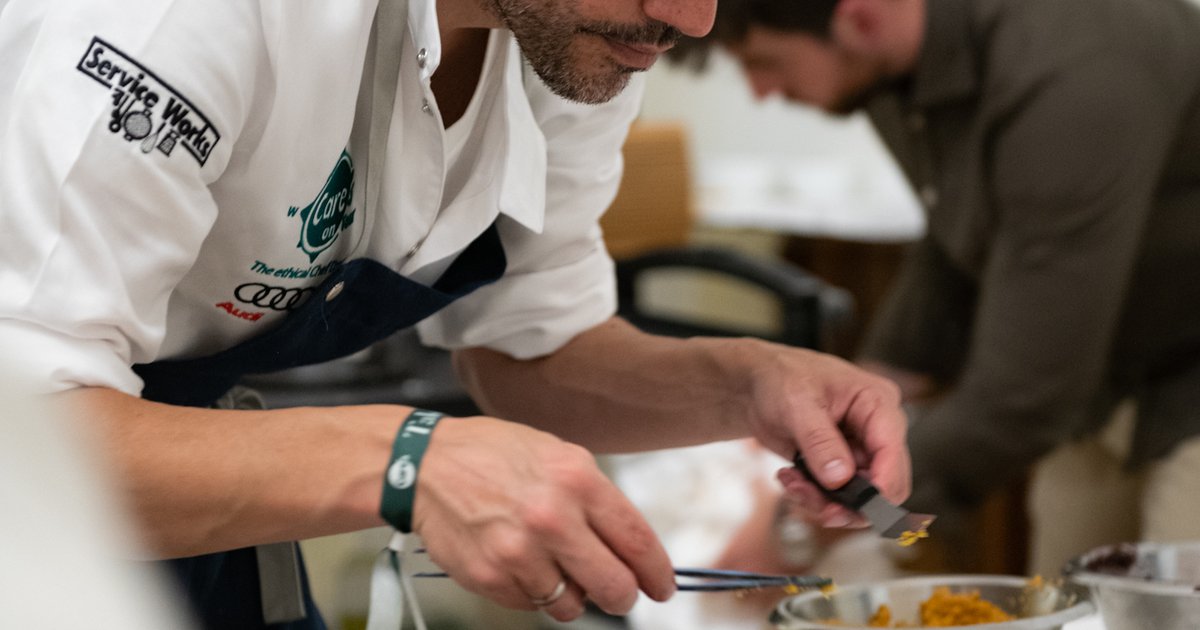 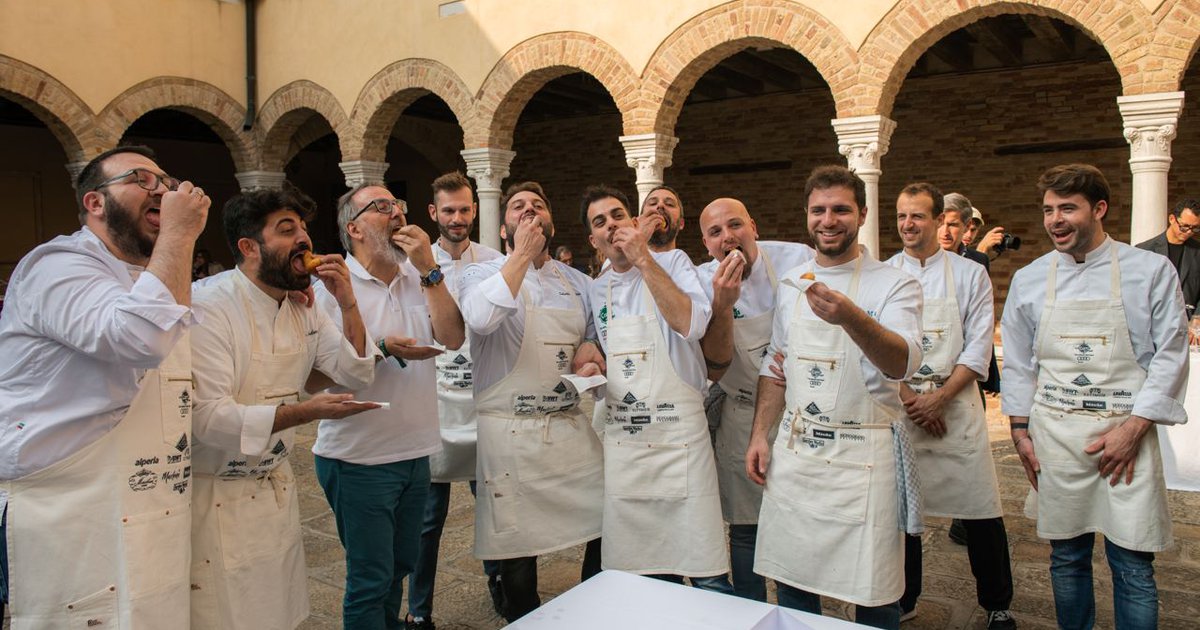 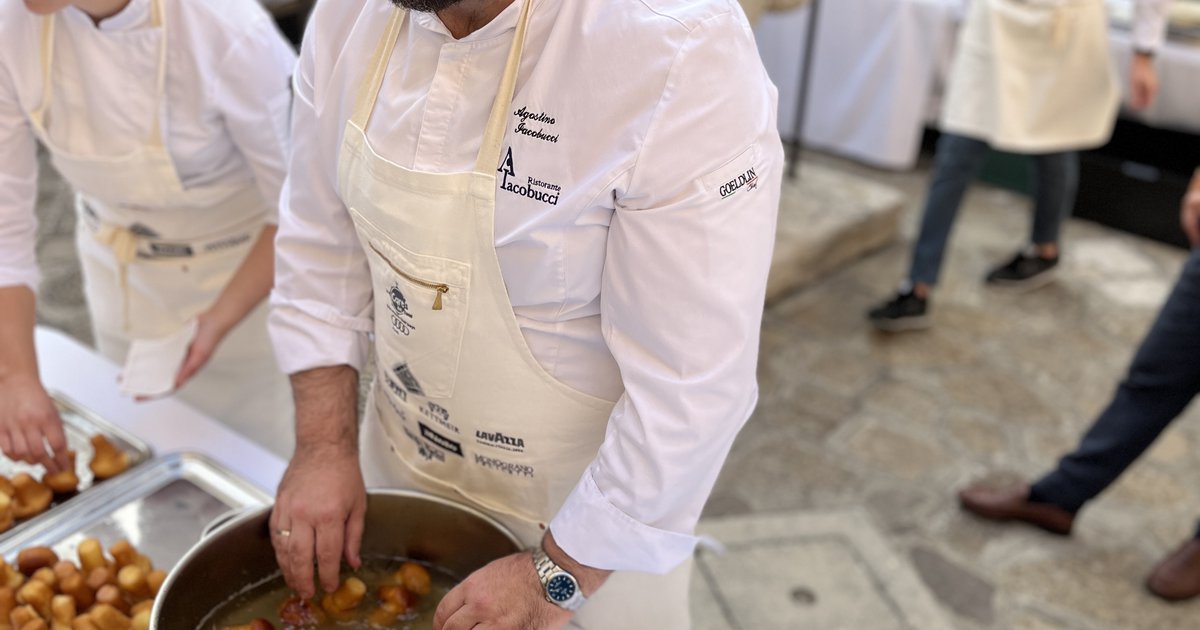 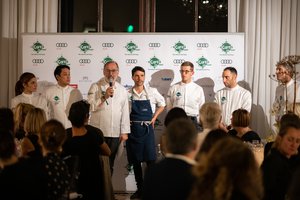 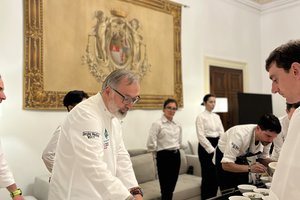 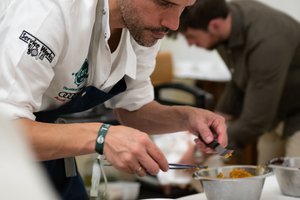 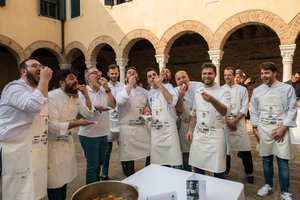 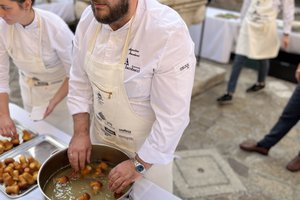